It’s been a fairly busy few weeks since my last post! I started doing some preparatory work for the future solar panel installation. I had purchased a small plug-in power monitor, and have been measuring the electricity consumption of the various items which could be run from the battery bank. This should tell me whether the initial installation will be sufficient for all of them, or whether some will need to remain on mains electricity for the time being. So far I have measured:
– The borehole pump. 0.11 kWh per day.
– The 12V transformer (running all the temperature gauges, central heating pump, and solar thermal panel pump). 0.29 kWh per day.
– Server. Ooh. Ouch. 1.93 kWh per day. Unfortunately it seems that this consumes too much power to run off the 650Ah battery bank in its current format.
Oh, and in case you were wondering why I don’t run the 12V items straight off the battery bank instead of converting the 12V battery power up to 220V AC and then transforming it back down again, the simple answer is: because of the distance between the battery bank and the 12V items. We’re talking some 25 metres of wiring. Voltage losses in a DC circuit would mean that I would need to run cables each having a cross-sectional area of 25mm2. This is the typical size of a vehicle battery cable. And a 50 metre length of this size cable would be horribly expensive.

We had a tremendous amount of rain a couple of weeks ago. When I was upstairs, I noticed a small puddle of water on the floor. This was traced to the point where one of the solar thermal panel pipes entered through a hole drilled in a roof tile. I had sealed around the pipe with some roofing sealant; but unfortunately this had dried and broken into little pieces, allowing rainwater to trickle through. Of course this meant I had to set up the scaffolding and roof ladder in order to access the problem area. Whilst I was up there, I also noticed that the insulation I had used on the copper piping between the panel and the roof tiles had completely perished. Obviously it’s not meant for outdoor use. I replaced it with another piece of pipe insulation, but this time wrapped the entire thing with duct tape, so it should last longer this time! I then re-sealed the holes in the tiles, this time using a bituminous mastic which remains flexible.

The next batch of beer is now fermenting away in the corner of the kitchen. This is an attempt at a clone of a Carmeliet Belgian Triple. I have enough ingredients to make two batches, should the first prove to be any good! In my last post, I mentioned we had obtained 20 litres of apple brandy. Well, as an experiment, I poured a gallon of this into a demi-john, and added some pieces of oak. These had been carefully baked in the oven, and then charred with a propane torch. After having been immersed for a few weeks, the oak sticks have now been removed, and they have turned the previously clear spirit into a lovely whisky colour. This needs to be left for a few more weeks before any tasting can commence. This is apparently a faster alternative to placing the apple brandy into oak casks for several years.

LSS has managed to re-organize the barn by sorting through some of the stuff which is still in removal boxes. The result is that half of the remaining dirt floor is now clear, ready for the next batch of limecrete. Once the weather warms up sufficiently, of course! Last week we paid a visit to the local quarry, returning with a trailer-load of sand. We’ll probably also need more gravel before the barn floor is complete.

The floor-to-ceiling bathroom cupboard is taking shape. Actually, it’s more of a shelving unit, because it won’t have a door. The entire thing is being made of pallet wood, and is looking rather nice. I’ll take a photo when it’s finished.

Speaking of bathrooms, we noticed the bath was starting to empty rather slowly. Obviously the wastewater pipes were becoming clogged with gunk. Now because we have a greywater reedbed, we can’t just pour drain cleaner down there! After some research, I found a greener alternative; namely sodium bicarbonate (baking soda) and white vinegar. Some of this was poured down the plughole, followed by very hot water. Yes, but. Although it produced lots of foam, this did not have the miraculous effect I was hoping for. The process probably needs to be repeated several times. Fortunately when installing the waste pipes, I had made provision for this sort of thing. There is a push-fit T-connector where the waste pipe exits the kitchen, and it was a simple matter to undo this connector, and push the garden hose down the pipe. Turning it on flushed lots of nasty-looking debris into the sump filter. I’m pleased to report the bath is now draining rapidly again.

I’ve been cutting more wood, which has been stacked in the woodshed. It does take rather a lot of time. There’s also still quite a bit of wood (roofing timbers from the burned-down garage) at the Aged FIL which needs to be brought back here and cut into pieces. There are still two aspens which need to be cut up into firewood-sized chunks. And a couple of large oak branches which are overhanging the road between the two farmhouses.

Not much has changed regarding the Aged FIL. He developed an abscess on one of his feet, so the doctor has been visiting a bit more frequently. The abscess has apparently provided him with an excellent excuse not to get out of bed at all, so he now not only gets breakfast in bed, but lunch and dinner as well.

Unfortunately one of our hens has discovered that eggs are edible. We’ve been getting more and more broken eggs lately, and it seems one or two of the other hens are starting to copy her. This is Not A Good Thing. It’s not always practical to visit the chicken coop at fifteen-minute intervals, so we purchased some roll-away nest trays online. The idea of these is that as soon as it is laid, the egg rolls into a collecting tray at the front. This tray is covered with a clear plastic lid. However, despite the apparent good reviews of these items, there is a design flaw. The tray is not really long enough. LSS found one hen perched on the tray, with her head reaching down inside to get to the delicious morsel it contained. Annoyed, LSS disappeared into the workshop, emerging armed with a hacksaw and some small pieces of wood. She ruthlessly modified the trays, and the planks of wood have increased the length of the plastic lids. This temporary fix means that the eggs are now safely out of reach of even the longest necks. I think I need to redesign the nest-boxes though. One more thing for my To-Do list.

Yesterday saw the final hunt of this season. The hunters were moderately successful this time, and bagged a mid-sized boar. M&O will probably pay us a visit this week to bring us a piece of meat. Of course, I’m only in the photo to give you an idea of the size of the beast. 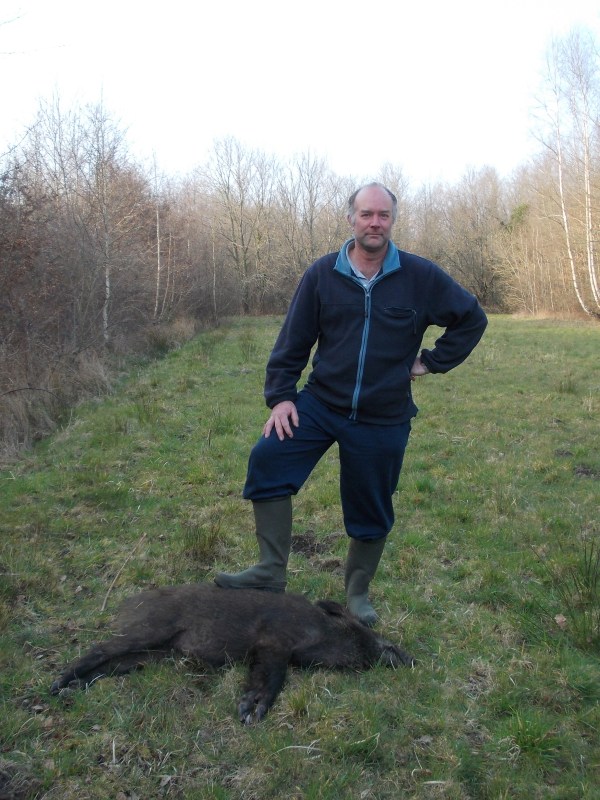 LSS has received a form from the tax office. This is to do with our permis de construire (building permit) regarding the work on the barn. You see, once the work has been completed, the tax office need to be notified so that they can re-assess the charge of taxe d’habitation (housing tax) which is based on the liveable floor area of the building. (A dirt floor is apparently not considered a “liveable floor area”). Well, as we have not notified them that the work is finished, they have assumed that the work must have been completed by now anyway. LSS sent the form back with the “Date of completion” box filled in as “2017?”. If they don’t believe us, they’re welcome to send an inspector round.

Wildlife diary: Mrs Duck has returned to the pond together with the two males. She has started a nest in the reeds, and this currently contains one egg. Hopefully she has more success this year. Mind you, the nest is only a few centimetres above the pond water level; and as the pond is not yet at full capacity, if it rains a lot her nest will be underwater. Silly duck.
And the blue tit is once again wanting to visit the lounge, because it looks like it is a potential location for a nice and cosy nest. It keeps tapping on the window requesting entry. However, this time it is not alone. A pair of tree sparrows noticed this activity, and now they ALSO want to come in. 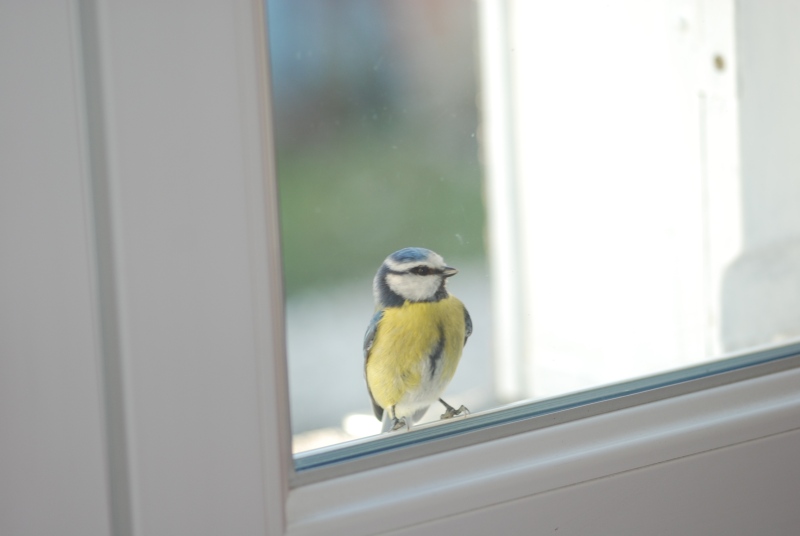