We’ve been in the habit of buying mandarin oranges over the past few weeks. Well, it has been the season!

Unfortunately the last batch we bought from Carrefour were inedible. Incredibly difficult to peel, and exceedingly bitter.

So I got cooking… 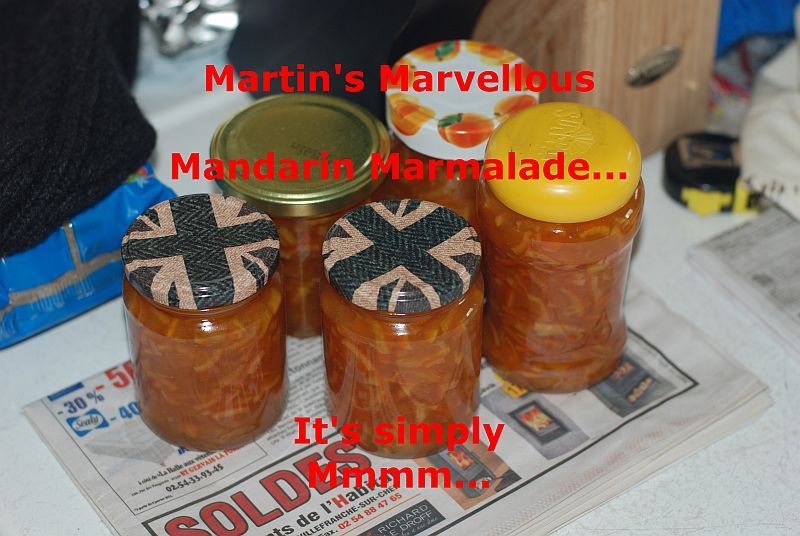 What an improvement! I may have to make some more…

So, we’ve just finished dinner – a courgette and ham quiche with green beans, followed by a pudding of tinned pineapple slices.

But I need to give you some background to today’s meal.

The late MIL was a little girl during the Second World War. France at that time was, of course, occupied; and as her family were tenant farmers, they received a lot of unwanted attention from the Wehrmacht, who confiscated the majority of the food. MIL was the youngest of ten children, and I think this scarcity of food affected her psychologically.

She had the tendency to hide food in the oddest of places. Open a cupboard full of clothes, and there, lurking underneath a moth-eaten shirt, would be a packet of biscuits. Packets of sweets would appear amongst the best china cups, and hidden in the rabbit shed you would find a tin of strawberry jam or a bottle of wine.

After the late MIL passed away, LSS attempted a major clearout of rubbish, and many food items came to light. Unfortunately most of the dry goods like packets of biscuits were either mouldy, or just stale and inedible.

Well, not everything was discovered. Last week LSS found two items which had been exceptionally well-hidden, and we have just finished eating them this evening – to wit, a Kilner jar of green beans harvested soon after Chernobyl (bottled September 1987); and a tin of Kenyan pineapple slices – “consume before December 1988”. Well, the tin was a bit rusty. But only on the outside. The pineapples tasted fine! And the green beans tasted – well, like green beans normally taste. A bit tingly on the tongue though.