Friday saw the start of our sixth year here. Time has gone past incredibly quickly.

The rainy season has now returned with a vengeance. Still, it’s necessary; the water in the pond is at rather a low point. 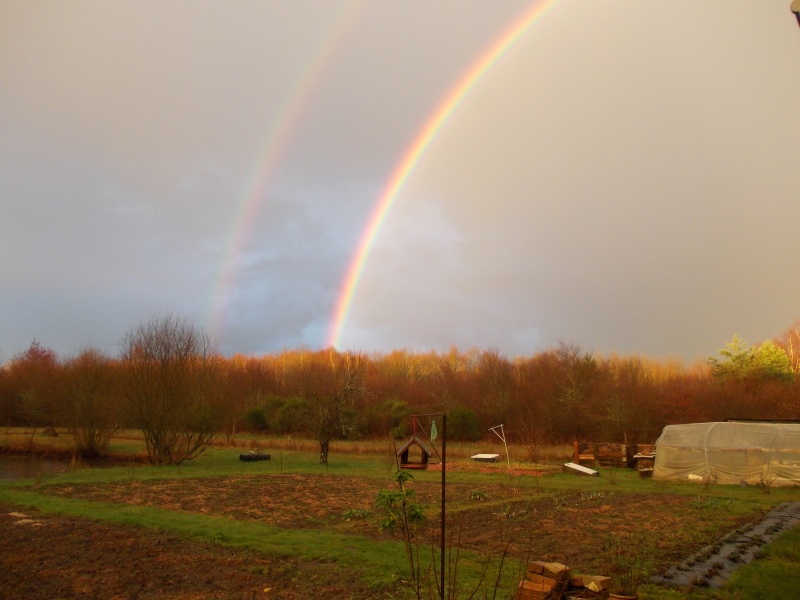 Fortunately before the rain started I was able to recommence work on the barn. The patio foundation has now been poured, and we’ve ordered a double-glazed window for LSS’s future office, and a non-opening double-glazed window which will go above the new sliding patio door.

I have removed the old lime plaster from the walls in one corner of the barn, and an old bird’s nest from one of the roof beams. I left the plaster untouched in the region of the window, as this will be removed together with the bricks when the opening is created. And the plumbing you see in the photo below is the pipework for the external shower. It’s been disconnected for the duration of the work. 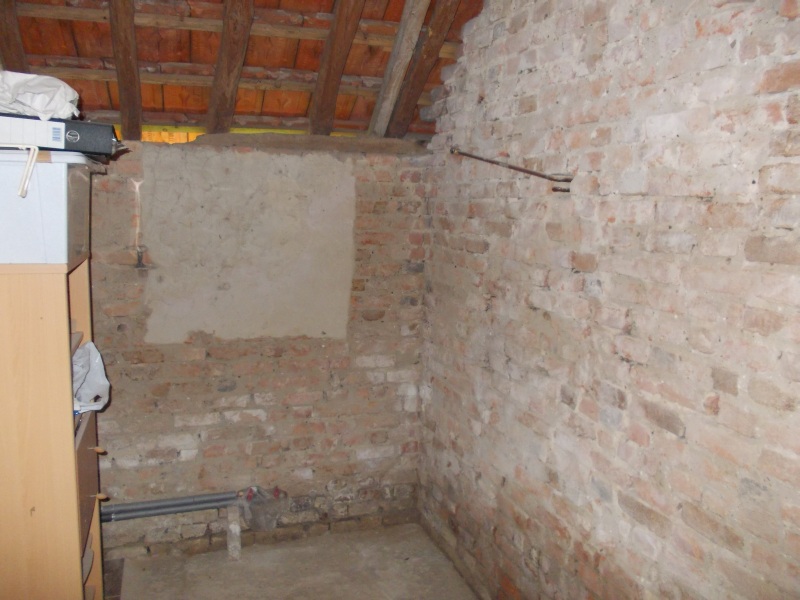 The next step will be to make a lintel for the office window, and lay the tiles on the patio step prior to the sliding door installation. Now prior to starting the work in the barn, I had purchased a small wet saw with diamond blade, because there would be a lot of tile-cutting involved. Up until now it has worked, although somewhat awkwardly.

There were some problems with this machine:
The floor tiles measure 460x460mm, which is approximately the size of the saw table top.
The water feed system was simply a shallow plastic tray under the blade, which emptied itself within seconds.
Plastic safety goggles and a raincoat were necessary equipment. (The flimsy blade guard did prevent spray; but it jammed against the leading edge of the tile and also left one unable to see the cut line, so I had to remove it).
And the flimsy single-clamp guide rail left much to be desired – especially if you like cuts to be straight.

So I constructed a new larger saw table out of plywood, made a frame for it at a comfortable height using pallet wood, and improved the water feed using a section of some old cupro-nickel brake pipe which can be connected to a garden hose. I now have a more accurate wet saw at the fraction of the price of a professional model.
And thanks to the incorporated zero-clearance sliding-rail sled, a raincoat is no longer essential equipment. 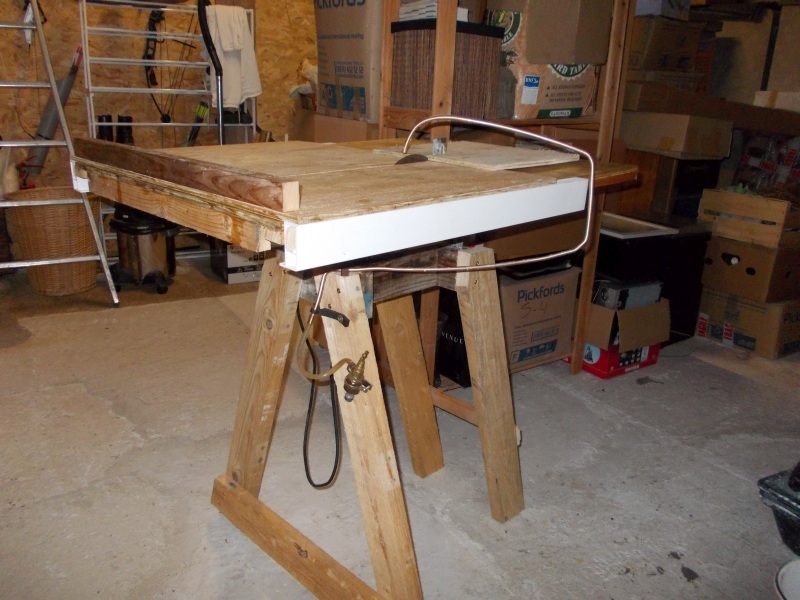 Saturday evenings have become our regular pub-night-at-home. Home-brewed beer, chips, and sometimes a steak; although this particular Saturday, sausages were on the menu. We’d just sat down and poured a pint when the telephone rang. It was Neighbour J.
“Help! I can’t get out of the house!”
“?” said LSS.
“My door lock is broken. I can only open the top half of the stable door, but something’s broken in the bottom bit. Bring an angle grinder; you’ll need to cut the lock out.”
Scratching my head, I put together a bag of tools that I thought I might need, and included the angle grinder for good measure. Although I thought there could well have been a problem if I needed to use it. You see, my power tools all have the correct plugs as per the current electricity standards. And just like the Aged FIL before the fire, Neighbour J’s house has never had its electric wiring upgraded – so her plug sockets all date from the 1950’s. And due to the design change, modern plugs don’t fit. Well, we’ll have to see!
When we arrived, with the aid of a screwdriver and a small pry-bar, I managed to disengage the latch from the strike plate, and open the bottom part of the door. Somewhat strangely, both top and bottom parts of the door have their own locks and handles. Removing the screws from the lower door lock, I found that the interior of the latch was badly worn, and was no longer being engaged by the spindle. I brought the entire lock back home, as I was sure that there was another one somewhere at the Aged FIL’s place which could be cannibalised for parts. But upon searching, the lock which I found was unfortunately not the same type, so I was unable to replace the latch mechanism. Therefore Neighbour J will need to buy a new lock. At least she can currently open the door, and close and lock it by using the upper lock and handle. And yes, her house only has one door…

One afternoon a couple of days ago, LSS had gone to the Aged FIL to deliver his weekly shopping, when I heard a vehicle stop at the driveway entrance. This was followed by a knock on the door. I went to see who it was, and was greeted by the sight of a blue Gendarmerie vehicle, and three tall, burly, police officers. Now I’m not exactly short at 1.83m, but they were much taller than I; and built like rugby players to boot.
After the customary Bonjours and handshakes all around, the tallest of the bunch rattled off a spate of rapid French.
“I’m sorry, I didn’t quite catch that. I’m English; if you speak a bit more slowly I’ll understand you,” I said. (In French).
“Ah. Eeenglish? I’ll speak Eeenglish then. We are looking for a dog.”
“Why? What’s it done?”
“?” (He obviously didn’t understand the English sense of humour).

The thing is, I don’t think that the Gendarmerie investigate lost pets. Unless the dog belonged to one of them, I suppose. It was apparently a small black one. I said I hadn’t seen or heard a dog recently, but if I did I would let the garde champêtre know. They then asked me about the house on the neighbouring property. This, like La Darnoire, had been abandoned for years; apparently being owned by some Parisians. Well, it was sold recently – to some other Parisians – and some renovation work has now been done. The owners tend to appear on weekends; although we haven’t met them yet.
“Parisians, you say? Ah, I see. Thank you very much. Have a good evening.”
At that they jumped into their vehicle and sped off.
Very strange.

Last week I processed two fallen aspen trees which the wind had blown down across the ditch dividing La Darnoire from a neighbouring property. (The one now owned by a solicitor. Yes, yet another Parisian.) And the pruning of low-hanging oak branches is also progressing, but the level of wood in the wood shed is still going down more quickly than it’s being replenished. Still, when it’s not raining, the sun is starting to have more of an effect on the solar thermal panel, so we’ll soon need to light the boiler stove less frequently.

Before I forget, I can now reveal the identity of the new home brew I mentioned in my last post: Birch Sap Wine! As we have a stand of birch trees (Betula pendula), I tapped some of them at the beginning of March; and 20 litres of the juice is now fermenting away in the corner of the kitchen. Birch sap is apparently very good for you. Obviously we had a taste of the sap before brewing started. It tastes like water, with a little something in the background. Hopefully the brewing process will give it more taste.

Oh, and Mrs. Bunny? She has six little kits in her nest, and their eyes are starting to open. And speaking of bunnies, as spring is now here I have re-commenced the tanning of rabbit skins…