LSS went to visit neighbour J today, delivering some leafy vegetable scraps for neighbour J’s rabbits. LSS returned with not only a promise that next spring we would be given a live bunny (in order to start our own rabbit-rearing program), but also with a new addition to the family. 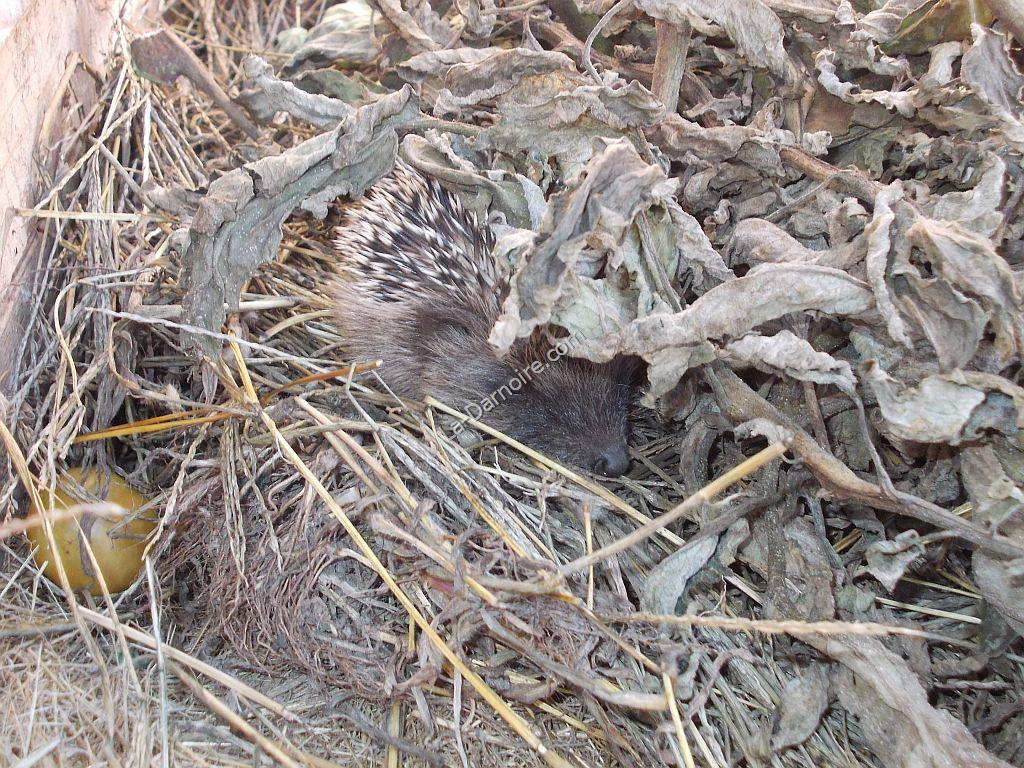 He’s taken up residence in the compost heap. Hopefully we can get a few more of these, as they are great at keeping the garden free from pests. Neighbour J said she’d keep an eye out for more (they tend to wander into her cow shed).

And as for the rabbits, a pair of bunny-skin moccasins are on the drawing board…

Those of you with smallholdings (or even large gardens!) will know that summer – especially late summer – is actually a fairly busy time of year. So I’m offering that as an excuse for the lack of recent posts!

The lounge electric work has finally been completed, and the replastering is well under way; I only have one wall left to do and then LSS can get busy painting.

The reedbed has been dug and lined with a layer of geotextile, followed by a pvc pond liner, and we are well on the way to filling it with the twelve tons of gravel we had delivered. We’re doing it by hand, with a wheelbarrow, so you can imagine it’s a lot of work!

I have also finished excavating the soil next to the North wall of the house to expose the crumbling brickwork, and have repaired most of this; the trench will be filled with gravel so that it acts like a French drain (rather apt, considering we’re in France!) This gravel will also contain the greywater waste pipe – leading to the reedbed – and rainwater overflow pipe leading to the pond. I’ve also poured a (lime) concrete base for the future firewood cupboard which will be accessible from inside the kitchen through a hatchway.

Progress on the construction of a rainwater drainage system is also well under way. Rainwater from the house roof goes into the six 510-litre drums for use in the garden; but rainwater from the garage roof needs to be led away to the closest ditch, a distance of some 30 metres, via a buried pipe.

The hens settled in very quickly; we’ve trained them to perch on the proper hen-perch which I constructed instead of nesting on the floor – obviously where they were raised there were not such luxuries as proper perches. They’ve also been trained to drink from a suspended plastic 2 litre bottle, with a chicken watering nipple fitted. Sounds sexy, but isn’t. The problem with giving water to chickens in a bowl, is that the water becomes fowl very quickly indeed (pun intended). Egg production has been impressive – we’ve now had 104 eggs. Obviously we don’t eat them all ourselves!

The pear tree near the pond has been making up for the dearth of fruit last year, by producing buckets and buckets of pears. LSS has made several pear tarts, we have pears for pudding most days, and I have the food dryer up and running with two trays of pear slices slowly desiccating. We have a brewing bin containing 18 litres of blackberry wine bubbling away, next to it is another brewing bin with 18 litres of elderberry wine, and once we have room the production of perry will commence, soon to be followed by a batch of cider. I constructed a steel-framed cider press so we’re ready to go! We have also been recycling a lot of the old bottles which were lying abandoned in one of the outbuildings. The labels tend to soak off rather easily, as the bottles are at least 30 years old. Cleaning the inside is carried out by soaking with a solution of sodium percarbonate (which produces hydrogen peroxide, a sterilizing agent) and then scrubbing them with a bottlebrush. Yes, it’s a lot of work but it saves us having to buy new bottles!

Hopefully this winter I’ll be able to do some long-overdue work on the website, including photos of various projects. Of course once the lounge replastering has been completed I’ll be able to get our computers out of cardboard boxes and we’ll no longer have to fight over who gets to use the laptop!