The week started on an interesting note. I was in the workshop when LSS came to see me. “The electricity has tripped. Are you using any machines?” I wasn’t, so went back into the house to reset the breaker. I noticed a strange plasticky smell, but didn’t pay too much attention.
Five minutes later, the electricity tripped again. This time there was definitely a smell of burning plastic. A CSI-type investigation ensued, and the culprit was traced to the three-phase main circuit breaker, which had melted.

Fortunately the husband of one of LSS’s cousins is an electrician, and a year or so ago he had given me a cardboard box of unwanted bits and pieces. One of these pieces was an older-style three-phase circuit breaker! This was duly installed, and the electricity switched on again. As you can tell, because I’m typing this on a piece of equipment which requires electricity, the installation was successful. However, I ordered a replacement circuit breaker from the French website I’d used before, Bis-Electric. If you’re in France, I can recommend this company; the part arrived the following day – which, if you’re not in France, is very unusual indeed. Next week when LSS is away giving English lessons, I’ll replace the replacement circuit breaker with the new one. We’re still no wiser regarding the cause of the failure. It could have been a power surge – after all, this is an old farmhouse at the very end of the electricity supply line.

Another trip to Orleans was also undertaken, in order to purchase a tile backing board. You see, the wall next to the bath will be constructed from wooden framing and OSB (Oriented Strand Board). This is easy to install, but after some research, I discovered that it has a disadvantage; you can’t fix ceramic tiles to it. So I purchased a 4mm-thick tile backing board. This will be glued and screwed to the OSB. One can then happily fix tiles to it without any fear of them falling off. And, as you may agree, tiles falling off a wall would not be a Good Thing.

The Aged FIL is now slow-roasting, and is nearly half-baked. In other words, I installed the two wall-mounted panel heaters. A grand total of 3,500 Watts of EDF’s finest electrons are now heating the immediate exterior of the farmhouse and contributing to Global Warming. You see, his house is not insulated. It’s not something he was prepared to do.

Here, the floor tiles have now been grouted, and another coat of sealer applied. Next week: Wall construction! I’ll need to bring the scaffolding into the barn, as I’ve discovered that the stepladder is just too unstable on the newly-sealed floor tiles.

This year’s batch of elderberry wine has finished fermenting, and is now ready for bottling. This will be done today.

And finally, a word regarding last night’s dinner; chicken drumsticks and chips. As is customary in this household, the chips are my department. LSS took care of the chicken. And as the kitchen wood-burning range is now in daily use, the chicken went into its oven.
After twenty minutes or so, LSS removed the dish to turn the drumsticks. She must have been momentarily distracted by something else, but returned the dish to the oven, and informed me that I could commence the chip frying. Twenty minutes later, the chips were done, and she opened the oven.
“BUT! WAIT A MINUTE! WHERE’S MY CHICKEN?” she cried.
I looked. The oven was empty.
“Uh oh.”
She’d put it back into the GAS oven. Which was obviously not in use. I must admit I burst out laughing. Which did not go down too well.
So dinner was a bit … delayed.

Unfortunately the Aged Aunt passed away last Saturday. The funeral was on Wednesday; these things are dealt with pretty quickly here in France.

The cider I mentioned in the last post has now been bottled. We have a grand total of 44 bottles: 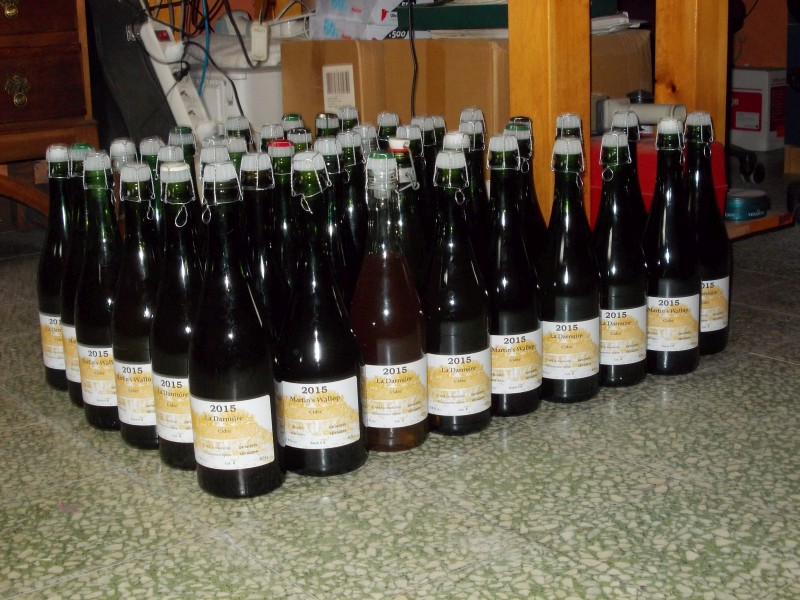 Also in the last post I mentioned the shower tray. In the next photo you can see the wooden wedges I made in order to get the floor sloping correctly. I just glued them in place temporarily; once the lime cement had been poured I removed them and filled in the gaps. You can also see the first lot of travertine tiles in place. The circular plastic thing on the right of the photo is the cover for the non-return valve for the shower waste pipe. 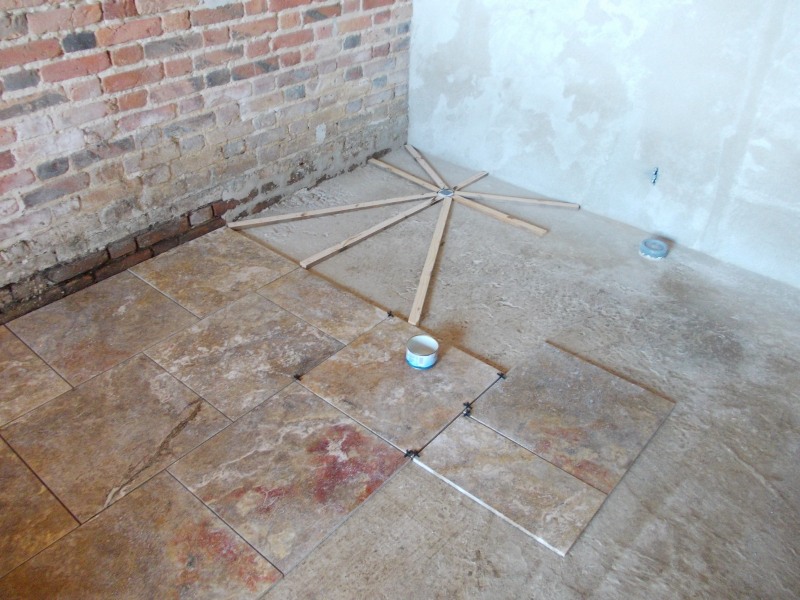 The weather has certainly become colder recently, but fortunately all the tiling has now been done – for this year, anyway! I still need to grout the tiles, and according to the weather forecast I should be able to do this on Wednesday next week. We’ll see. Here’s what they look like – they have been sealed with a breathable sealer: 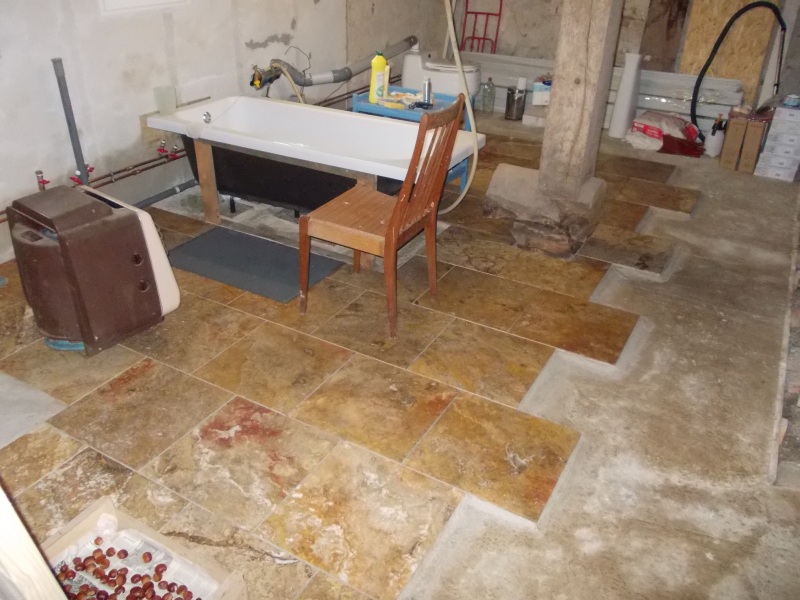 I’ve also insulated the bathroom roof. Not that it’s made much of a difference when having a bath though; after all there aren’t any walls yet – and the wind whistles through the gaps in the wooden barn door! Never mind, the situation will improve shortly… 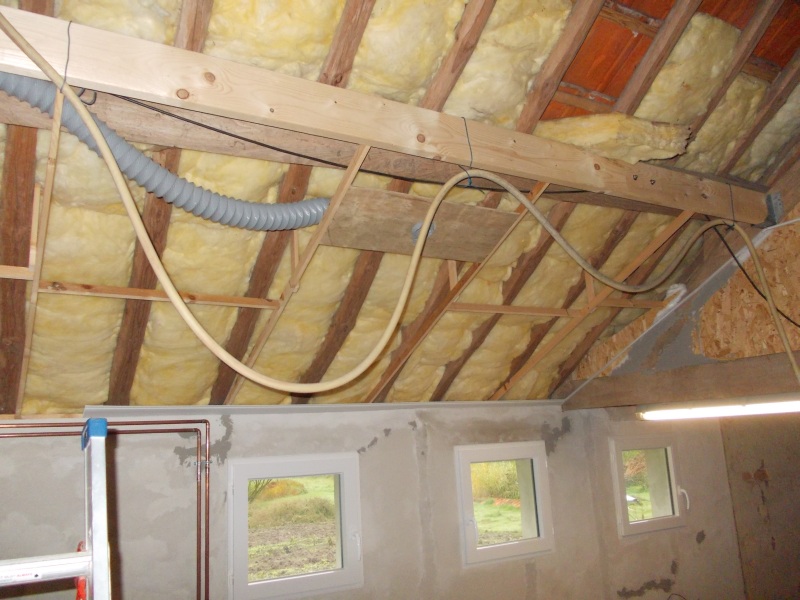 A brief interval to show a photo of today’s breakfast: 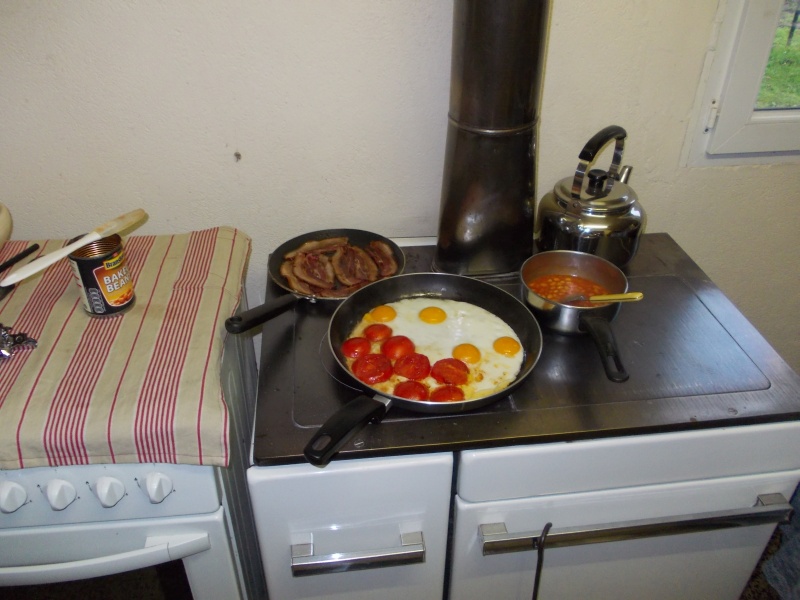 The only thing not locally produced was the baked beans…

One of the Aged FIL’s myriad of little electric heaters has given up the ghost, so there’s something else which has been added to my To-Do list; installing two wall-mounted panel heaters in his house. His current heaters were not really designed to be on 24 hours out of every 24 – I’m surprised they’ve lasted this long. Anyway, at the time his household electricity was being upgraded after the fire, LSS had the foresight to ask the electrician to install two heavy-duty plugs for wall-mounted panel heaters. Of course the Aged FIL was very cross about this. “I DON’T NEED ANY HEATERS!” Fortunately we didn’t listen. Now he’s complaining he’s cold. The National Grid shareholders are rubbing their hands together in anticipation, as the company will soon be able to afford cases of champagne for their meetings.

One final thing – I used an ordinary car battery for our reedbed solar-panel-supplied sump pump. It’s lasted a year and a half, but has now unfortunately given up. I now know why you shouldn’t use a car battery for this sort of installation; the lead plates in its construction are too thin, and cannot withstand the slow charge and discharge of a solar panel system. We’ve thus ordered a replacement 80Ah Deep Cycle AGM (Absorbed Glass Mat) battery. These have much thicker lead plates, and are better suited to the job. Just thought you’d like to know.