Mr and Mrs Duck have returned to the pond. We’re not sure if it’s the same female as last year, but in all likelihood it is. After all, last year’s duck successfully raised a brood of eleven ducklings.

The kitchen woodstove has started smoking whenever there’s a gust of wind; in between showers of rain, I fetched the double ladder, leaned it against the kitchen wall, and climbed up to the top to have a look at the rotating cowl on top of the chimney. It appears to be home-made, and the problem is that the support bracket has rusted and sagged, so the cowl itself is now off-centre and no longer rotates fully. It is binding on the side of the chimney pipe. I removed it, and this seems to have cured the smoking problem. I’ll need to make another support bracket; one more item for the “To Do” list.

We had a storm yesterday, which deposited a layer of hail; this blocked one of the gutters so I had to go out in the downpour to clear it. I was not a happy bunny. Google also started annoying me; they deleted my other blog yesterday because their automated system considered it to be spam. I requested a review, they apologised, and re-instated it. This morning they deleted it again. So I have now given up on Blogger and instead moved that one to self-hosted WordPress as well.

Wildlife diary: A pair of blue tits have decided they want to come into the house, presumably wanting to make a nest somewhere dry after all this rain. They fly onto the window sill, or cling precariously to the wall at the side of the window, then flutter around in front of the glass. Getting tired of this, they perch on the bottom of the PVC window frame and peck hopefully at the glass as though they’re knocking to come in. Taptaptaptaptap. Taptaptaptaptap. But irritatingly, when you go over to open the window and say “Yes? Who is it?” they fly away. The down-side of this charming behaviour is that we now have muddy kitty paw-prints all over the inside of the window glass, as Cat could not fail to notice their behaviour. “Ooooh, yes, come in, do. Home Food Delivery, now that’s what I call service.”

Yesterday was beer bottling day! As mentioned in the post of 2nd November, our neighbours T&M have become converts to home brewing. He modified a couple of old stainless steel beer kegs into a mash tun and wort kettle, and not a month goes by without our being invited to a degustation. I must admit, although I have tried full-grain brewing, even BIB (brew-in-a-bag), I prefer the liquid malt extract kits in a tin. It’s much less work, and you can still modify the taste and strength of the final result as you desire. However, last year I ordered a couple of kits from Brewferm which I had mistakenly thought were the usual liquid malt-in-a-tin type. It turned out they weren’t; instead being bags of malted barley. The thing is, our largest saucepan is only capable of holding 12 litres of liquid, so the first kit had to be cooked up in two batches. It turned out fine though.

A week ago I decided to finally use the second kit. This time I borrowed T&M’s mash tun, and brewed the full 20 litres of beer (still using the BIB method). Yesterday it had finished fermenting, and is now bottled.

I also extracted the two demijohns of perry (pear cider) from the outbuilding where they had been fermenting quietly since October last year. I racked them to remove the sediment, and have just finished bottling it. I haven’t forgotten about putting up a page on the apple press and scratter for the manufacture of cider. It will happen!

Next on the list is the bottling of the blackberry wine. After that, the demijohns will be empty, so we intend filling them again by brewing another batch of parsnip wine as we still have some parsnips in the garden. We’ve found it to be really good. It was supposed to have an aftertaste of whisky, and actually, it does!

M&O also paid us a visit yesterday, delivering a large, heavy, black plastic dustbin-bag. They had had the last hunt of the season on the property last Sunday, and had bagged yet another wild boar. This was our share of the spoils. It included the boar’s head (which LSS will turn into pate. Both she and the aged aunt like it, I give it a miss). Our freezer is now practically full. As the aged FIL does not like the taste of game, in previous years the hunters learned not to give him a share of their results. However, they seemed delighted to discover that we do like the taste of game, so they appear to be making up for lost time. We’re certainly not complaining; it’s saving us a fortune in shopping bills.

We had a visit from neighbour J’s cousin. He hadn’t seen LSS since 1985, had heard she was back in town, and wanted to catch up. He’s really into genealogy, and gave LSS an unexpected present: his research on her family name which he had managed to trace back as far as 1655. This is not as strange as it sounds, as their families are related.

He’s also somewhat of a buff regarding local history, and gave us some interesting photocopies. During WW2 there was apparently a German radar station based on the farm next to neighbour J. The electricity supply came all the way from Lamotte Beuvron, some 8km away, and was installed by Russian prisoners of war. It crossed La Darnoire and the farm of the aged FIL. Of course no trace is left today; I suspect it was carried on wooden posts.

Then in July 1944, the electricity supply line was bombed and destroyed by two RAF De Havilland Mosquitos. They also jettisoned their long-range tanks, and this chap’s father promptly took one of them for use on his farm.

The radar station itself had a 7.5 metre dish, and was blown up by the departing Germans on 20 August 1944. The radar dish was made of aluminium, and this was rapidly scavenged by the locals. There are bits of it still in use here today as handy carrying baskets. The aluminium is of good quality, and quite thick.

The concrete base of the radar station is apparently still there, overgrown with trees. We must go and have a look, one of these days. I know there were the ruins of a German-constructed building in a field next to the road approaching the aged FIL, probably about 200 metres from the site of the radar. It can still be seen on Google Earth, but not for long; the remains were removed last year by the farmer so that he could have unrestricted access with his plough.

As it’s been raining rather a lot recently, I’ve had to postpone the construction of LSS’s polytunnel. Instead, I enjoyed being inside, in front of the computer.

As a result, the whole website has now been redesigned, and is now suitable for viewing on a mobile device. Unfortunately, this meant that the blog was looking a bit odd, and despite lots of testing, I just couldn’t get Blogger to play nicely. So I have installed WordPress, and with a bit of tweaking, here it is. I hope you like the new look.

Several pages have been added to the main website too. You’ll find them under the “Heating” and “Bathroom Facilities” menus. More will be added soon!

So, what else is new? Well, our chickens have finally paid for themselves. Breakeven point was reached on the 11th February, at egg number 541. From now on, free eggs!

The next project when the weather improves (apart from the aforementioned polytunnel!) is the construction of a solid base behind my workshop. This is where the rabbit cages will be located.

Oh yes, and we were given a coypu by our neighbours. The meat was turned into a paté, and I have tanned the skin. 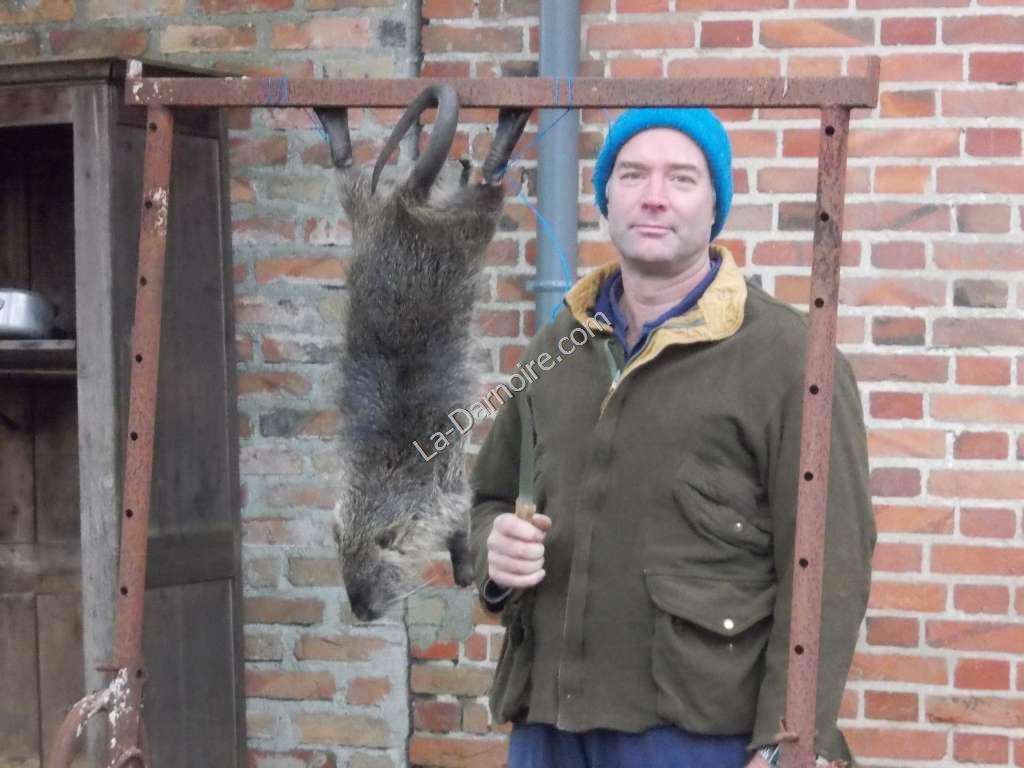 I intend making a hat…