What a day! We finally have solar-heated hot water! In the morning I filled the solar panel loop with 8 litres of antifreeze (propylene glycol) and connected the rest of the wiring for the controller board. Unfortunately there was some air in the system, so this entailed switching the pump off for a while in order to let the air bubbles rise into the expansion tank. During this time the temperature of the solar panel rose to a massive 92°C.

I then experimented with different pump speeds. It’s a Laing D5 Vario 12V pump, and has five speed settings. After some trial and error, I found that pump speed 3 provided the best all-round operation. Speed 5 was cooling the panel too quickly.

I also discovered that one of the temperature gauges had failed, so I swapped a couple of gauges around so that the non-working one was the least important reading (the room temperature of the upstairs area).

In the afternoon I bottled this year’s batch of Elderflower Champagne, but I could not resist peeking at the control panel every so often to see the changing temperatures in the thermal store! 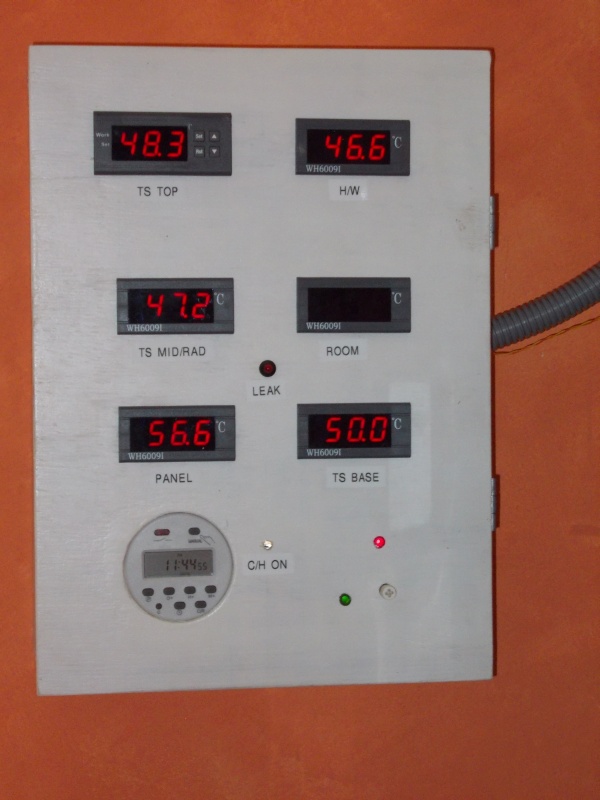 Yesterday LSS bought a second-hand wardrobe for €20; we went to fetch it with the trailer. We’ll be able to save a bit of space in the bedroom by using the wardrobe instead of the long free-standing clothes rail which we currently have. And space needs to be saved; the bedroom will become smaller shortly when I start constructing the corridor to the barn.

Wildlife diary: A very strange-looking bird was stalking around the edges of the pond in the morning. Some swift research revealed it to be a black-crowned night heron – the first one we’ve seen!