So much for the New Year resolution to make more frequent blog posts. No, not really. I stopped making New Year’s resolutions a long time ago. The truth of the matter is that my computer keyboard ran out of ink.

Seriously, I have just not been in the mood. However, this has now improved, and although I can’t promise a new blog entry every day I will try to ensure the interval between posts is not too long.

On the garden front, things are not looking too brilliant. LSS pulled up a few parsnips to go into her vegetable curry. Unfortunately it looks like we won’t be doing any parsnip wine this year; the crop has been very poor.

A week or so ago we were required to complete a census. Whilst LSS was at work, I was visited by the official census person. Unfortunately the timing could have been better, as LSS was at that point knee-deep in paperwork for the aged FIL (retirement homes application forms). Of course LSS had to fill out the census forms on behalf of the aged FIL as well. And as I was the bearer of this bad news when LSS got home (the paperwork had to be completed within 48 hours), I was the unfortunate recipient of an angry tirade (although I had filled out as much of the forms as I could). Moving swiftly on to other news…

The pond has once again frozen over. And isn’t it funny that problems with mechanical items always occur at the wrong time of year? LSS’s Hyundai started losing power at low revs. I initially though there could be a problem with the clutch. Then there was an increase in noise from underneath, so the diagnosis of a hole in the exhaust pipe was fairly easy to make – this was confirmed when I crawled underneath. The next day the engine management warning light came on. LSS took the vehicle to a local garage, who said the low revs power problem and engine management light warning were all due to the hole in the exhaust; the lambda sensor was giving incorrect readings. They quoted €180 for a new front exhaust pipe. Plus labour of course. So instead I ordered a replacement part online, saving €100, and this arrived a couple of days later. So despite the freezing weather, I was underneath the car, installing the new front pipe. The engine management ECU was reset by simply disconnecting the vehicle’s battery for five minutes, and everything is now back to normal.

Then, when cleaning the greywater reedbed filter last weekend, I noticed that the plastic barrel which was serving as a sump had risen out of the ground by about 20 centimetres, lifting the wastewater entry pipe and slightly buckling the side of the barrel. I initially thought the cause was a phenomenon called “frost heave” (where water in the soil freezes and expands in volume – this can even crack concrete). However, further investigation revealed the culprit – the high water table. All the cold wet weather recently means that the water table is now 30cm below the soil surface. I opted for the easiest remedy, putting 14 bricks inside the barrel, and also placing a block of concrete scavenged from the aged FIL’s shed on top of the lid. All this added weight means that the plastic drum is now once again in its original position. I estimate I’ve lost some 20 litres of greywater capacity due to the bricks, but that still leaves 100 litres which should be sufficient.

The Aged Aunt is still in the recuperation centre (the same place the aged FIL was). She’s doing all right; they’ve inserted a steel pin into her femur so she’ll have to avoid airport security screens in future. But she’s getting physiotherapy and seems cheerful enough.

A small tree near the pond was leaning over the road due to the sheer weight of the ivy it was carrying, so I cut it down. It is now currently awaiting further processing so it can go into the wood shed. If it’s not too windy, one day next week I’ll make a start at felling the first of the two large dead aspen trees. They’re both the same size; with a dbh (technical term: diameter at breast height) of 0.68 metres.

As an update regarding the Yagi antenna: I think it needs to be mounted at a greater height. However, as I don’t have any 20-metre poles lying around, further refinements will have to wait. I obtained a new battery for my old Sony Ericsson mobile, and I now have a signal strength of one bar inside the house. However, I’m not sure whether this is due to the new battery, or the Yagi. I do know that I’m not at all impressed with the Blackberry’s reception. Which is a pity, because I like the full Qwerty keyboard. Here’s the mounted Yagi (and I did NOT enjoy installing it one-handed from a nearly vertical ladder): 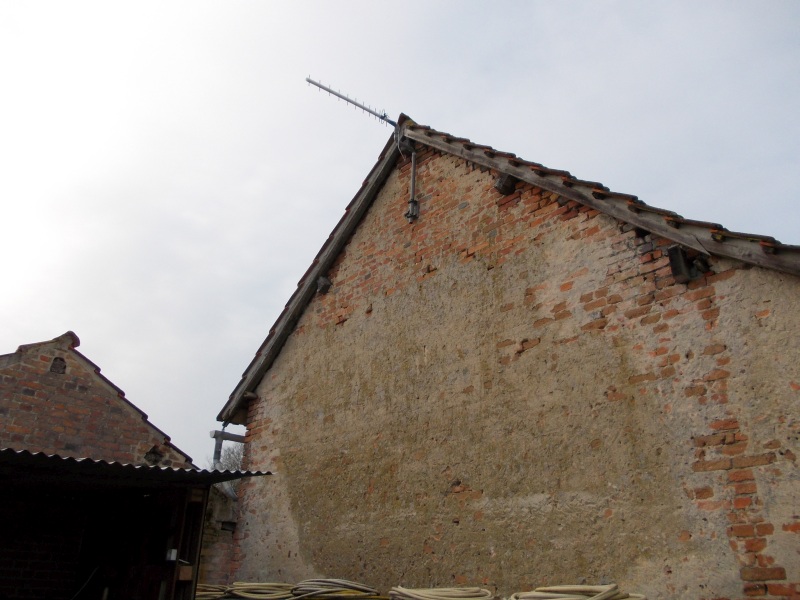 The 2013 batch of elderberry wine (24 bottles) was tested last week. Unfortunately something seems to have gone a bit wrong with it, as the taste was rather sharp and slightly vinegary. So we reluctantly decided that we would have to use it for cooking rather than drinking (we don’t throw anything away unless we absolutely have to!)

However, as it was so cold yesterday evening, we had a brainwave. We poured a bottle of the stuff into a saucepan with some cloves, cinnamon, orange juice, sugar, and a tot of apple brandy – and made some mulled wine. Delicious.  22 bottles left…

I’ve also started fermenting the next batch of beer. A barley wine this time. I’m aiming for a 12% brew.