I still have some wood to cut with the chainsaw, including some dead oak branches in Sloe Alley, but unfortunately the rainy weather has delayed this. No matter; I have lots of things to do indoors. I have started tanning the next batch of rabbit pelts; the website updating is still progressing slowly; and I have also manufactured a tool which can be used to dismantle pallets. Based on an idea seen online, I initially constructed one from timber. Although the tool worked quite well, it only removed one board before the timber split. So I have now made a replacement – in steel this time – welding together some scrap metal from the aged FIL. I’ve named it “The PalletXploder” ™. It works very well! 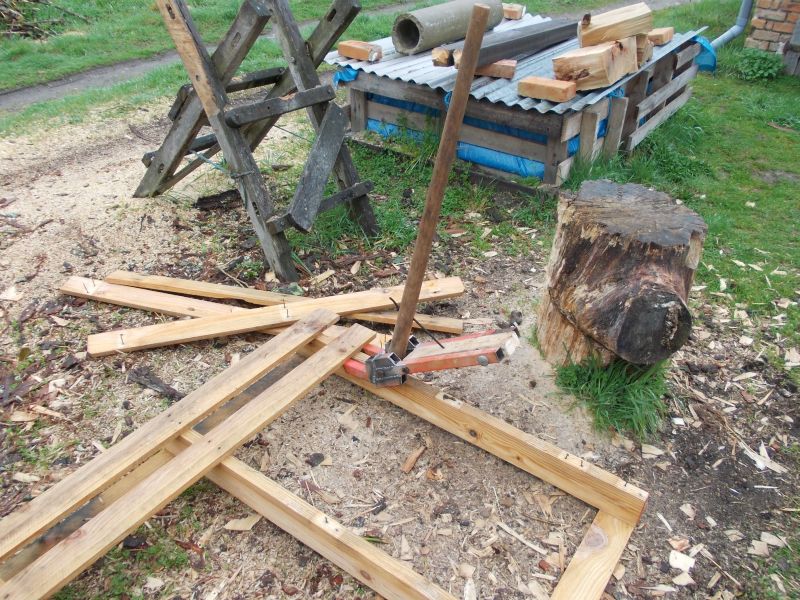 Simply place the protruding ends under the pallet crosspiece, and step on the other end with one foot. The fulcrum is the end of the wooden handle. Excuse the clumpy-looking weld seams; my mig welding machine is starting to misbehave.

To remove the nails from the pallet pieces, rather than standing or kneeling on the piece of wood and levering out the nails, I’ve found an easier method is to clamp the nail extractor in the vice on the workbench, and move the piece of wood around that. An ideal tool for this would be the forked end of a crowbar. However, my own crowbar is of the mini variety, and the fork end of the aged FIL’s monster crowbar is too worn. So I clamped my old faithful Gedore claw hammer in the vice instead. 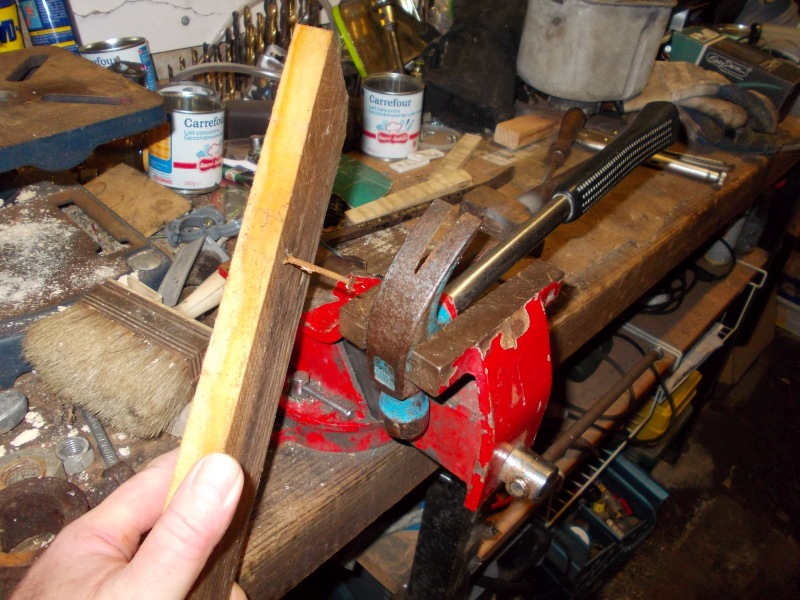 By doing it this way around, the advantage is that the entire workbench becomes the lever, so far less effort is required to extract the nails.

As I started this post by mentioning chainsaws, I thought I would report back on the practice of using a natural oil for the chain. A chainsaw has two tanks; one for the fuel, and one for a special chain oil to lubricate the chain as it cuts. If the chain is insufficiently lubricated, the guide bar quickly becomes worn out due to the friction. A tell-tale sign is the metal turning blue due to heat. (Of course another cause of this could be that the guide bar oil feed hole has become clogged, but that’s beside the point). This special chain oil is also quite sticky, so that it does not get flung off the chain too quickly. However, it’s also rather expensive. So a couple of years ago I switched to using rapeseed oil, available from the local supermarket. It’s the cheapest oil available here. Well, after two years of use, I am pleased to report that there have been no adverse effects. The chains are much easier to clean and sharpen. And the guide bar is still looking good; in fact it seems to last longer than when using regular chain oil. And as an additional advantage, this oil is a natural product – so it’s less polluting for the environment than the synthetic mineral oil.

Wildlife news: a pair of magpies have started constructing a nest in a tree next to the garden. I’ve told LSS that she’d better not leave any of her jewellery lying around outside. Not that she does, of course. And not that she has much jewellery anyway. We’ve also seen our first moorhen, inspecting the reeds around the edge of the pond – perhaps for a possible nesting site?

Typical. As soon as I mentioned that we had not heard the cuckoo yet, they made an appearance. However, this year it is the normal call; our dyslexic bird from previous years seems to have gone.

Another job has appeared on my “To Do” list. The aged FIL’s ancient Deutz tractor. It was second- or third-hand when he bought it last century, and I think the seat is still the original. The cover has long since worn away, and the foam rubber has become somewhat thin on the seat. The back cushion has disintegrated entirely, and the bare metal is really rather uncomfortable. Well, in one of the aged FIL’s sheds there is an old Renault van, which was given to him for use as parts. I’ve removed the passenger seat, and will see if I can somehow adapt it to fit in the tractor. This should be an interesting mini-project!