In the morning I fitted the solar panel tubing into the frame, having first inserted a layer of glass fibre for insulation. I now need to drill some holes in the end of the frame for the exit of the tubes.

We then went to the aged FIL so that I could pump up the three spare tractor tubes. I think the reason they are going flat is that they have punctures; but when testing for leaks I had not inflated them sufficiently. Having pumped them up using the ancient compressor in his garage, I discovered I was correct. Each one had a tiny puncture. These have now been repaired, and I’ve asked LSS to feel around the inside of the actual tyres to see if there are any thorns, as her hands are more sensitive than mine. I couldn’t feel anything, but there must be a thorn through the casing somewhere.

Now, if you remember correctly, I have mentioned several times in the past that the aged FIL’s house is in sore need of electrical rewiring. However, he has refused, saying that a) he does not have the money (“If the house needs rewiring, YOU can pay for it. I’m not paying a cent!”) and b) it’s not necessary anyway. “It’s worked fine since the electricity was first installed in 1946. I don’t care if standards have changed since then.”

Well, today was the day that our predictions came partially true.

At 6 p.m. LSS received a phone call from one of the carers. “I’ve just arrived to give him his dinner, and I’ve called the Fire Brigade; the garage is burning down.”

We dropped everything and dashed over. The Fire Brigade arrived some ten minutes later; the village fire engine is apparently in for repair, so they had enlisted the help of the next village, Brinon. The entire building had collapsed, burying the compressor, welding machine, and heavy-duty lathe. Fortunately we had removed the aged FIL’s car from the garage several months ago, as it was getting covered in owl droppings.

The police were there as well. Apparently when there’s a fire, they have to attend to determine whether the cause was accidental, or arson. The mayor turned up too, as did the Garde Champêtre. The reason they attended was because it was a domestic fire, and they needed to ascertain whether the occupants needed to be re-homed if the building turned out to be uninhabitable. Rather a good system, I think. 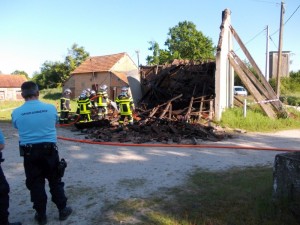 It seems that the ancient wiring had finally given up the ghost. Fortunately the ancient ceramic fuses had given way as well, so the entire main building was also without electricity; otherwise there could well have been a chain reaction which would have burnt down the main farmhouse too, with the aged FIL therein.

Although I had unplugged the compressor from the mains (as I usually do after using any of his equipment), the strain on the ancient, cloth-wrapped wiring had obviously finally proved to be too much. The silly thing is, although the aged FIL wears an emergency aid button on his wrist, he didn’t think of pressing it. “I heard loud bangs, and saw lots of smoke,” he said sheepishly, “But I didn’t want to bother M&O.” (The way the emergency button works, is that the central control station telephones us first, then M&O, then one of the carers, and if no response is forthcoming from any of these, the fire brigade. As luck would have it, the last two times he has pushed the button, we were unavailable, so on both occasions M&O responded.) LSS drily pointed out that M&O had volunteered to be on the list, and would not have done so if they had not been prepared to help.

The loud bangs he heard were exploding paint tins, as these were stored on a shelf above the electrical cabinet. Well, I call it a cabinet. It was a piece of wood with wires draped around it.

Because of the electrical danger, the Garde Champêtre had called a local electrician to ensure that when the fire department sprayed the smouldering roof beams with water, there were no unpleasant electrical surprises. The head of the fire brigade then held an impromptu meeting with the other officialdom present viz. the electrician, EDF, and the police. The conclusion was that the wiring was unfit for use, and if the aged FIL does not upgrade it, his house will be declared uninhabitable.

The local electrician then looked in horror at the electrical installation, but dug out his miner’s LED head-torch and got busy in the gloom to ensure that at least the kitchen and bedroom had a temporary electricity supply for the aged FIL’s heaters.

On Monday LSS will be busy on the telephone, getting estimates for the electrical upgrade, speaking to the insurance company etc. etc. Unfortunately (or fortunately) this is the last straw; if the aged FIL refuses to have his electrical wiring upgraded, LSS will have no option but to contact the police and EDF in order to declare the building officially uninhabitable; and the aged FIL will then be re-homed to a retirement house in the village whether he likes it or not, for his own safety.