There’s an annual equestrian event in Lamotte Beuvron, which entails 10,000 horses visiting the area. (No, that’s not a misplaced comma). This means that people have a requirement for stabling, and as we have a vacant field available, we’ve decided to prepare it to receive horses.

In preparation, LSS has cut the grass in the field with the tractor. To provide water for the animals, we brought a heavy cast-iron bathtub from the other farm. It used to be a cattle trough. We had to use the transport box on the tractor to bring it here!

The weather has now warmed up somewhat, so LSS has once again been busy in the garden. Using some PVC sheeting which she found, she has created a raised bed for the strawberry plants. I believe it’s called “plasticulture”. 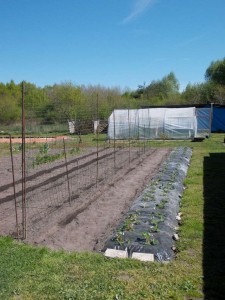 She has also used a remnant of the polytunnel PVC sheeting to construct a long cloche for the first potato plants. In the polytunnel itself, radishes are already growing. The tomatoes are being a bit slow though.

The problem with the Renault 5’s braking system has now been resolved. The calliper piston on the right front wheel had completely seized. However, despite extensive research I was unable to find replacement seals or pistons anywhere, so ended up buying a complete re-manufactured calliper for around €40 (including postage). All the vehicles are now once again operational.

I finally completed the garden shed. I built it against the workshop rear wall using the customary pallets and covered these with recycled corrugated iron sheets. At least now all our garden machinery can be stored out of the rain and no longer takes up space in my workshop! 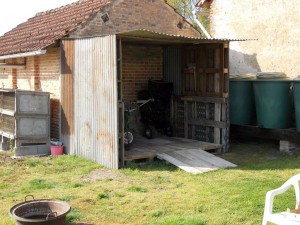 Work on the solar panel is progressing; the next job is to attach 30 metres of copper tubing to the panel. Then I need to glaze it (using some sheets of window glass which came off an old combine harvester). Even though the copper tubing I’m using is of the annealed variety (in other words it’s easier to bend) I have had no end of trouble forming smooth 180° bends without kinking the tube. Lacking a professional pipe bender, another method of bending copper tube smoothly is to fill it with sand prior to bending it. Unfortunately when each tube is ten metres long, this is not really a viable option. So there is no alternative but to solder two 90° elbows at the end of each run. A total of 56 elbows are required…

Wildlife diary: There are now 10 eggs in the duck nest, and Mrs Duck is in residence.