It’s been raining constantly since Friday. The public road at the bottom corner of the property is now impassable to ordinary vehicles; the ditches just can’t cope with the amount of rainfall. I believe we’ve had over 80mm over the past two days.

Early yesterday evening LSS took the Renault 5 to the aged FIL in order to clear one of the ditches there. You see, when they flattened the burnt-out garage, they had somehow failed to notice the large ditch which ran behind it. The result of their building-flattening manoeuvres was that they blocked up the entrance of the drainage pipe running under the entrance of the courtyard.  Well, the water couldn’t go anywhere, and had started backing up into the courtyard: 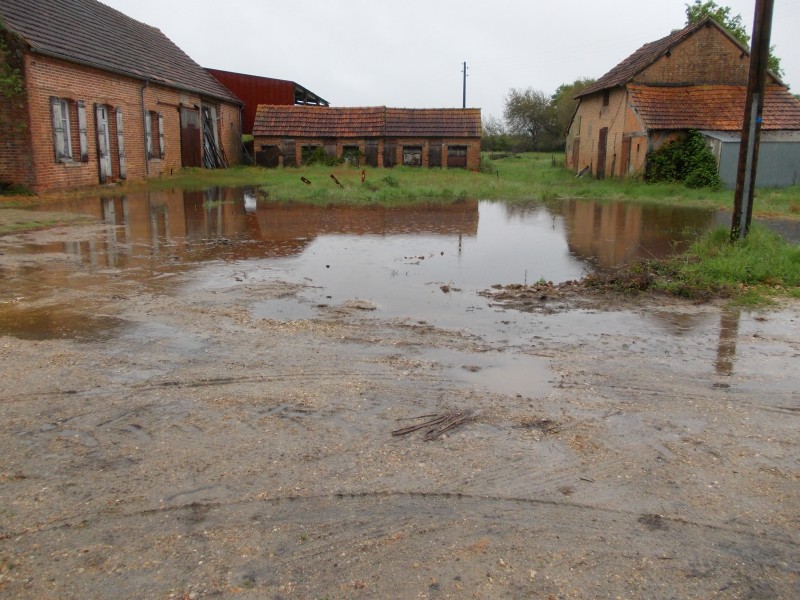 The aged FIL would probably have been all right because his medical bed is fairly high off the floor; but LSS thought it would be prudent to try and prevent the high tide from entering the house if at all possible.

Unfortunately she stopped half-way to clear another overflowing ditch (due to another blocked pipe under the road). I say unfortunately, because the car wouldn’t start again. Surprisingly, there was a mobile phone signal in that spot, so I responded to the distress call by rescuing her with the Hyundai. As it was fairly late in the day, we simply left the Renault where it was.

Today we returned with the tractor and towed the still-unresponsive Renault all the way to the aged FIL. This was simply because it was facing the wrong way, and the road was too narrow to turn it around. Once at the aged FIL, we found the water was now lapping at the sill of the back door. We cleared the blocked pipe by using lengths of chimney sweeping rods with a steel brush on one end; and the water level started dropping almost immediately. We then reattached the towrope to the tractor, and towed the Renault all the way back home along the flooded road. In the next photo I am walking along a particularly damp section with the pipe-clearing rods over my shoulder. It’s difficult to see the depth, but the water was half-way up my wellington boots. Actually the pipe under the road here was not blocked, but just couldn’t cope with the sheer volume of water. 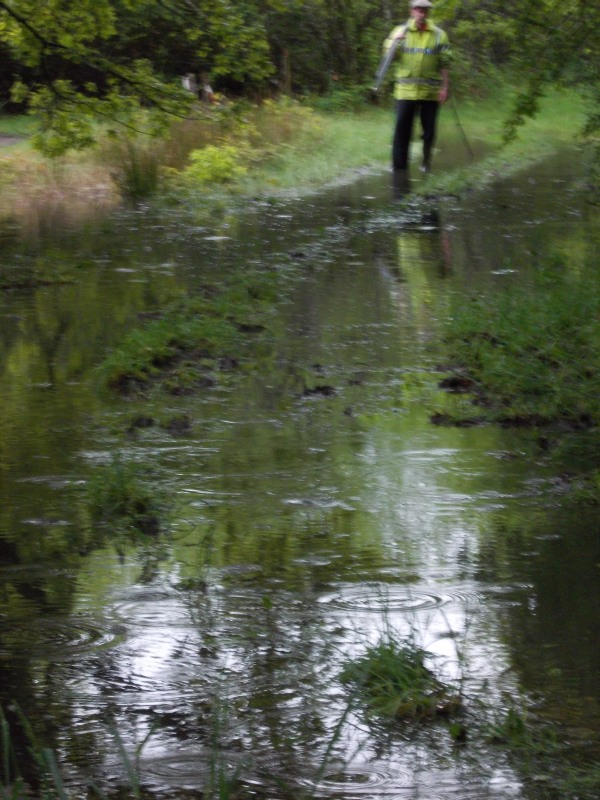 Back at home, I diagnosed that the Renault was, perhaps unsurprisingly under these conditions, flooded. No, not with water; but too much petrol was getting to the cylinders. I removed and cleaned the sooty-black and wet spark plugs whilst LSS returned once again to the aged FIL with the tractor for further ditch-clearing operations. I eventually managed to get the Renault to start again, but it’s still running very rich (the inside of the carburettor was completely black). Unfortunately the tuning of carburettors is not my strong point, so it looks like we won’t be using this vehicle for the foreseeable future.

Despite our raincoats, LSS and I were both soaked to the skin, so as all the outside work was complete, we each had a nice hot shower, then took the afternoon off.