Well, it’s possible that summer is finally on its way. We’ve had several days in a row without rain. Of course this means the plants in the garden will need watering, but you can’t have everything! We’ve also been able to use the solar-heated external shower again. The advantage of that is that the waste water drains into the reedbed; we don’t have to manually empty it!

As night-time temperatures are now staying above five degrees, work on the barn floor has started again. As far as the subfloor is concerned, the actual bathroom area is now complete, and LSS has started excavating the next section (to the right of the photo below). 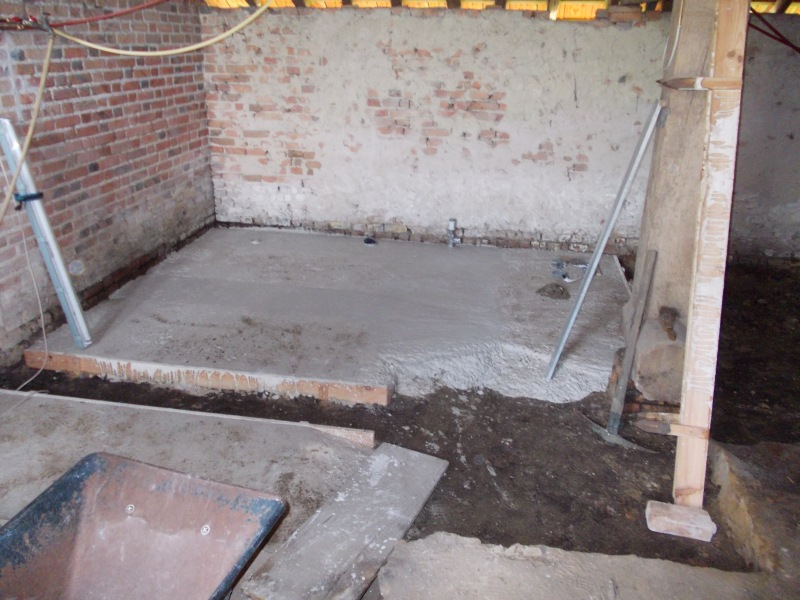 It’s hard to believe, but this little lot is what 62 concrete-mixer-loads looks like. Well, it is 10cm thick!

Earlier in the week we took the trailer to the local quarry and fetched another 700kg sand. The price has gone up; it’s now €9.50. For 700kg. Still a bargain! For storing the sand, I made a box out of pallets, and lined it with a tarpaulin. Two corrugated-iron sheets cover the top to keep the rain off:

We have also made a massive stride forwards regarding what we’re going to put on top of the limecrete base. You see, it’s all very well having a floor made of breathable limecrete, but if you then slap down an impermeable covering like ceramic tiles on it, you may just as well have constructed the entire floor out of concrete. And in an old building like this one, an impermeable floor means that any moisture in the ground will rise up in the walls. So after some more research, we’ve hit on the idea of using limestone tiles, which are, like the limecrete, breathable. Now the next task is to source a supplier. For the bathroom, it may be cheaper to get off-cuts, and construct a sort of crazy-paving effect. It could look quite nice! The shower floor will still be tadelakt, but I think I’ll probably tile the wall with ceramic tiles.

Last Saturday we went to the market fair in St. Viatre, where we popped in at the bakery. LSS teaches English to the baker’s daughter, and we came away with two great big bags of stale bread for the hens/bunnies at the bargain price of €0. Speaking of bunnies, last week we took Mrs. Bunny to visit Mr. Bunny at neighbour J, so hopefully the next batch of future bunny stews has been started. Unfortunately we’ve lost two male bunnies over the past two days. This morning’s victim had a bloody nose, so diagnosis of death was fairly easy. It’s a disease fairly common here, and known locally as “the blood drop”. It’s caused by the calicivirus, and the disease is known as RHD (Rabbit Haemorrhagic Disease). It only affects rabbits; the meat is still safe to eat – so both bunnies are currently in the freezer (as are the rabbit skins). They really are extremely delicate creatures.

Rabbit pelt tanning is also continuing; the latest batch of four brings the total to 19. Another 31 and we may have just enough for a blanket.

The batch of Irish Stout is now ready for bottling. I’ve decided to call it Gwyn Ness, after the Scottish loch visited frequently by Charles II. Next up: elderflower champagne.

LSS has asked me to make some planters for the greenhouse. I’m constructing these out of dismantled pallets. Four done, two to go! 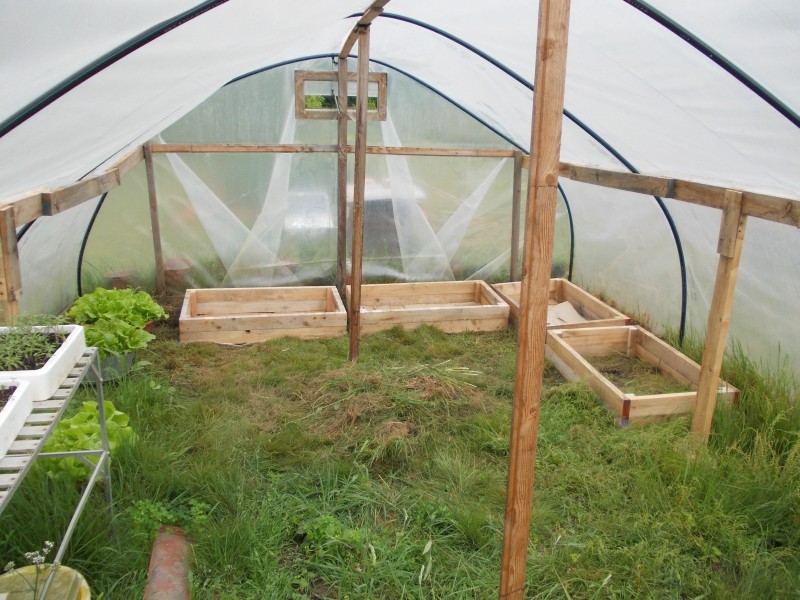 Oh, and speaking of pallets, my “PalletXploder” exploded. The old oak pick-axe handle split. I have now replaced it with a steel scaffold-tube, so it is operational again.