We still have a mouse problem upstairs. Unfortunately they are now ignoring the live trap, the bucket-of-water trap, and the mousetraps. At night we can hear the little blighters gnawing and squeaking. I think they’re trying to gnaw through one of the oak rafters. So LSS bought some glue traps as well. Success! Three less mice this week. There are unfortunately still more where they came from. I’ve no idea what they’re eating, as there is no longer any food stored upstairs (we used to use the upstairs area for drying old bread for the hens).

I’m still tanning bunny skins. I’m trying to process two per week. I currently have a cardboard box with 53 tanned pelts; two of which have been reserved for my bunny-skin moccasins.

Friend V from Paris took a few days leave, and stayed with us. We put her to work gathering grass and plants for the rabbits. She also cooked a rather nice chilli con carne. This was in payment for the work I did on her car. You see, the last time she was here she mentioned that when her car had its last service, the mechanic recommended she change the front brake pads. Silly me, I told her it was a fairly easy job, and that I’d done this work on LSS’s Hyundai a year or two ago. So she said if she bought the pads, could I fit them? So that’s what I did. And yes, it was a fairly easy job.

Last Sunday we went to Poulaines, because there was a car-boot sale and donkey fair. Of course, as soon as we arrived, it rained. So we cowered in the village church until the rain stopped, then looked around the car-boot sale. The rain started again and we returned to the church. Upon the next cessation in dampness we went and had a look at the rather miserable-looking donkeys, before returning to the church for the next downpour. Note the ZZ-Top lookalike… 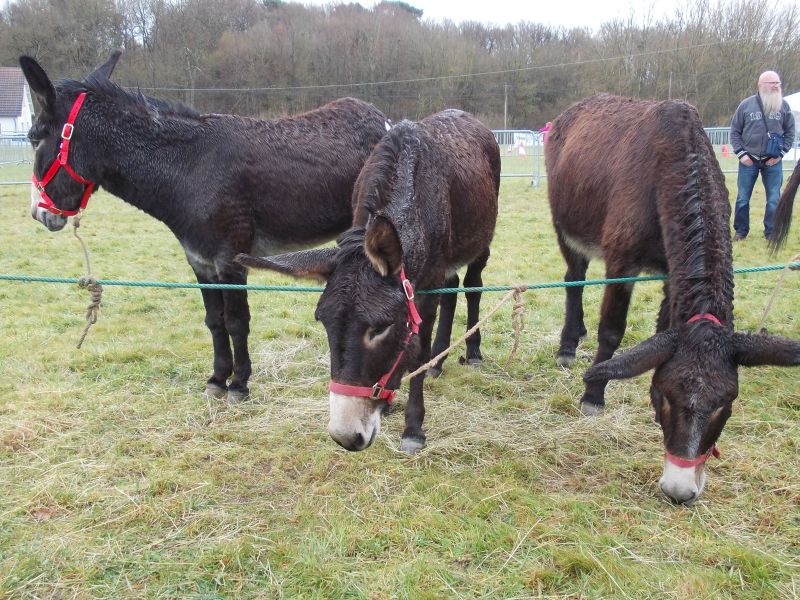 When the rain finally stopped we dashed out for a bite to eat, and then decided to call it a day and come home. So I can’t really tell you what Poulaines is like, but I can tell you that the church needs a coat of paint and some plaster repairs to the ceiling.

The electricity consumption measurements have now been completed. As I expected, the solar panel battery bank will be able to power the borehole pump, 12V transformer, and the reedbed sump pump without any trouble. Even if we have four consecutive days without any sun at all, the batteries will still be more than 50% charged. But it can’t run the server though, which is a pity.

Speaking of servers, unfortunately LSS’s LCD computer monitor has started flickering rather badly, so I replaced it with the one from the server upstairs. This means we no longer have a spare, so I suppose we need to think about getting a replacement. However, all the modern ones seem to have either HDMI or DVI connections; the old VGA connector seems to be quite rare.

The woodshed tarpaulins have now been replaced, with the exception of one. The old ones are torn in places. I also made up some short bungee cords to tie the new ones in place; it’s now a lot easier to access the wood.

We’re down to 14 hens again. One of the older hens went to the chop (we identified her as the egg-eater, and since her demise we have not had any eggs eaten.) Then unfortunately one of our two new hens seems to have had a heart attack; we found her dead in the chicken run.

The pallet-wood bath panel has now been varnished and put in place, and I have installed the backing boards ready for the tiling. I made the bath panel in three parts; two are fixed in place and the third is removable so that there is access to the plumbing if required. 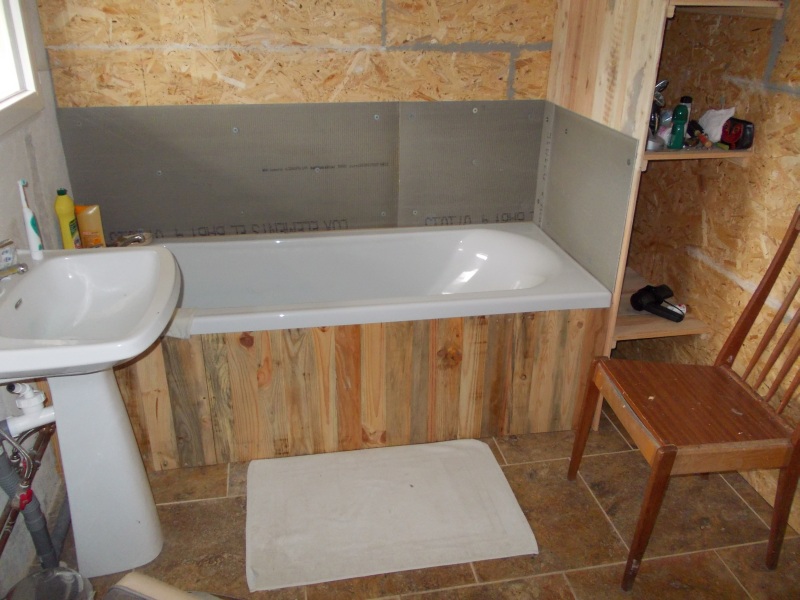 In other news, we’ve both now had our customary haircuts, ready for the summer. If we get a summer, that is. I sprayed the peach trees in the garden with a copper sulphate solution to try and prevent the peach leaf curl disease this year. So, of course, it rained, washing off all the copper sulphate. Fortunately we have lots of the stuff; we discovered a 25kg bag in one of the Aged FIL’s outbuildings. Here it’s called bouillie bordelaise, or Bordeaux mixture.

The last batch of beer has now been bottled. 41 bottles! Now we need to wait a month before we can try it. In the photo below I haven’t put the labels on the bottles yet. 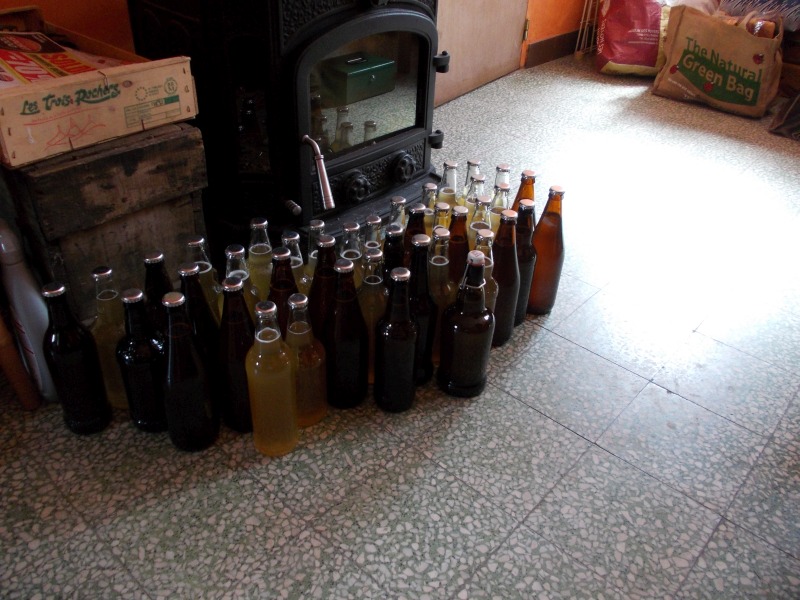 I have also been splitting firewood this week. The first aspen has been reduced to firewood-sized pieces; but next week I need to bring back two oak trees. Then there are a further two fallen aspens which need to be dealt with – and I have noticed that there are a few more small trees which have fallen over in the area we call Soggy Bottom. When I have finished with this lot the wood sheds should be full again!

The fake wasp nests have now been re-installed under the eaves of the house, so that once the weather warms up we should not be bothered by these little pests. I’ve also repaired and reinstalled the horsefly traps.

On Saturday the Aged FIL did not get breakfast. The washer telephoned LSS at around 09h30, saying she couldn’t get in because the door was still locked. LSS shot off to the other house to open the door. Several angry phone calls later, she discovered that the carer had actually turned up to feed him (I was going to say “get him up and feed him” but this is no longer strictly true because he now eats all his meals from the comfort of his bed), but couldn’t get in because the door was locked, and the key was not in its usual hiding place. One of the previous carers had forgotten to put it back, and left it on the kitchen table. And Saturday’s carer did actually look up LSS’s contact number in her little handbook, and tried to telephone. The problem was that the contact number she had been given was not ours. It was actually the Aged FIL’s. And because he dislikes the telephone, it is not, as one would think, next to his bed. It is in the kitchen. With the ringer volume set to zero. Still, at least he got lunch. And due to his usual somnolent state he didn’t realise he hadn’t had breakfast.

Wildlife Diary:
Last Saturday we saw a bat on the barn door during the daylight hours. It seemed fine but had obviously got itself a bit lost. Upon our approach, it slid into a crack in the wooden panel, and was gone the next day. In the evenings there are at least six wheeling erratically above the pond. And, the cherry on top of this week’s Wildlife Diary, is the appearance of two Eurasian Hoopoes. LSS heard a rather strange call one afternoon and told me to listen. “Hoop hoop hoop hoop”, it went. “Strange,” I said, “It sounds a bit like a hoopoe. But I don’t think you get them here. Maybe it’s a dyslexic pigeon.” Well, it wasn’t a dyslexic pigeon. It suddenly appeared in the garden, where it inserted its long beak into a suitable hole and emerged with a huge mole cricket, which it proceeded to eat with obvious enjoyment. It then repeated the exercise several times, each time with success. Yesterday afternoon it returned, but this time it brought a friend. It’s the first time we’ve seen these birds.