Wildlife diary: Well, there is good news and bad news. I had previously mentioned that Mrs Duck had returned, and started a nest in the reeds next to the pond. Well, the good news was that two days ago there were a total of 13 eggs in the nest. The bad news is that today there aren’t any. I have no idea what happened to them; but they’ve completely disappeared. Not even an eggshell remained. It could have been a marten.

We saw the Aged FIL’s neighbour a couple of weeks ago. He’s not Greek, but he came bearing gifts. You see, he works at a place which sells, inter alia, animal feed. Several sacks of bunny food had reached their best-before date, so they were consigned to the dustbin. Like us, he abhors waste, so he rescued the sacks and brought them here. The bunnies were delighted.

I am still in the weekly process of sorting out the Aged FIL’s workshop. The scrap metal pile has now reached tremendous proportions. Today I discovered a 5kg bucket of calcium carbide. I have no idea what I’m going to do with it. It’s normally used for making acetylene, which goes bang. Or for fuelling miners’ carbide lamps. But as the Aged FIL doesn’t have a mine, I can’t see that he would have used it for that.

The “cupboard” door in the bathroom has now been made and fitted. 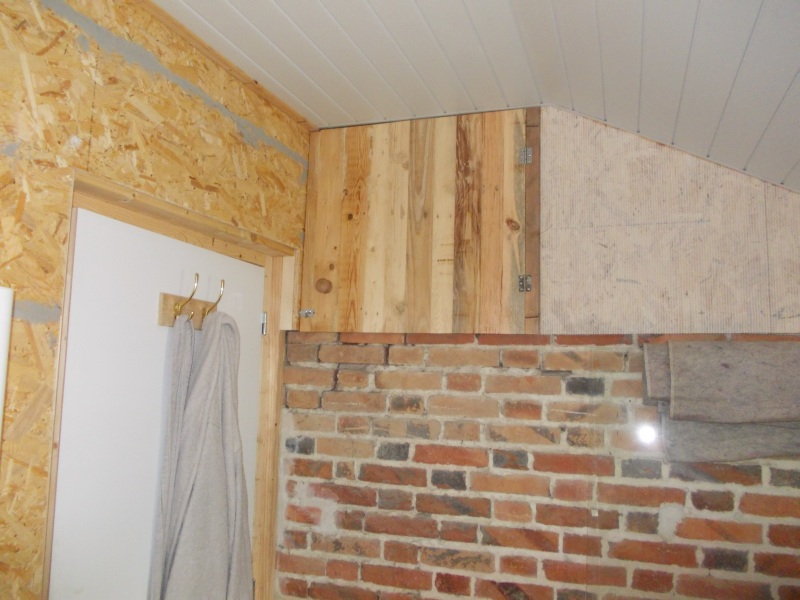 Behind the door is a space between the pantry and the roof. It’s fairly small, and currently only houses the VMC (extractor fan unit). Access to this place is not easy, so I doubt we’ll be using it for storing anything else. Although I intend making a rope ladder so at least we can get up there if necessary; a stepladder is difficult because there isn’t room to get it close enough to the wall.

Actually, something strange happened when I was varnishing the cupboard door. There I was, in my workshop, whistling away whilst wielding the paintbrush, when I heard a “frrrt-frrrt-frrrt-frrrt” and something landed on my shoulder. Of course I jumped. And whatever it was departed as swiftly as it had arrived. As soon as I saw it departing I realised what it was – a tree sparrow. Why it thought I was a tree I have no idea.

On Monday afternoon last week I had a fairly unpleasant experience; my second kidney stone. I last had one in 1996, so knew the symptoms. LSS was visiting a friend at the time, and when she returned, took me to the doctor. It wasn’t our usual doctor, but a locum. He diagnosed (surprise) a kidney stone, and gave me a prescription for painkillers, a prescription for a local lab test, plus a prescription for further scans etc. etc. at the hospital in Romorantin. And, true to form, in the car on the way home (before I’d even taken any of the medication) the pain stopped as suddenly as it started. The lab results proved my (and his) diagnosis was correct. No further pain since then – so if it turns out to be an occurrence once every 20 years I suppose I can’t complain. At least I now have some extra-strength painkillers in the medicine cabinet should it happen again.

Further wood-cutting has taken place. I have felled and dismantled one of the leaning oak trees next to the road between the two farmhouses. One down, several more to go! And another aspen had fallen down into our neighbour’s field, so that has also been dealt with.

Friend M (ex-half of T&M) came around for dinner one evening last week, bringing her new boyfriend. He apparently works in IT, so I sympathised.
Then on Saturday we had a cousins’s reunion dinner. These of course were LSS’s cousins, on her father’s side. The occasion was a celebration of her one remaining aunt’s 84th birthday, so the Rugby Club Hall in Romorantin had been booked. There were cousins, cousins once removed, twice removed, three times forgotten etc. etc. Not really my scene. But at least I was seated next to JP’s son, whom I knew. You remember JP? Of ballon room fame?  They have a farm near Vierzon and occasionally stop by here to say hello and have a coffee. Anyway, we got back home at 2 a.m.

It will soon be oil-change time again. Let’s see, I have the tractor, a lawnmower, the motor tiller, the wood chipper, another lawnmower, and a generator to service. So I trotted off to the supermarket and came back with 30 litres of oil. Some price investigation had revealed that the price per litre was actually less when buying it in 5-litre containers at the supermarket, rather than in 25-litre or even 250-litre drums at the local agricultural supply store. I’ve ordered the tractor oil filters online.

And finally, this week I’ve been busy bottling wines. The raspberry wine yielded 27 bottles. The blackberry wine turned out 18 bottles. And I’ve now run out of corks so the bottling of the sloe wine will have to wait until I can get some more. A swift stock-take revealed that we now have a total of 157 bottles of various home-brewed wines and cider in store. That’s not counting the beer. Well, at least we won’t need to buy anything to drink when the upcoming economic crash occurs.