Last Sunday the wind decimated the horsefly traps. I had to retrieve them from the bottom of the garden where they had ended up. And last night the same thing happened. They were attached to their hanging poles with fishing line which seemed to be no match for the occasional Sologne weather. I am now going to use steel fishing trace.

Then one day last week I went to use the tractor. I intended taking it to the other farmhouse so I could take off the transport box and install the brushcutter, ready for LSS to start cutting the grass and weeds around here. Due to the rain, the grass is now waist-high in places. Well, I discovered that some bumblebees had made a nest in an inaccessible place in the engine. I had to drive with the cabin door open because they were very unhappy bumblebees indeed. Bumblebees can certainly sting; unlike ordinary bees their sting does not have a barb, so they can use it repeatedly. Fortunately they don’t normally sting humans unless their nest is threatened. Which, of course, it was. So although I wasn’t stung, I regret I had no option but to spray them with insecticide when I returned with the brushcutter attached. LSS is not partial to stings.

Due to the overcast skies, we’ve had to resort to lighting the boiler stove in the evenings, in order to heat the water in the thermal store. We did have one sunny day; and of course that was the day that the solar controller expired. It’s a little electronic circuit board which turns on the pump when the temperature difference between the solar panel and the thermal store is greater than 8 degrees. It was purchased from REUK, the Renewable Energy website. So I ordered another one; plus one spare. Unfortunately the replacement doesn’t work – the quality of workmanship seems to have gone down since the manufacture of the first one. So I won’t be buying from REUK again. Instead I ordered a differential temperature controller from Ebay. It’s proudly made in China by Will-Hi, the same company that produced the other temperature gauges on our control panel. Which are all still working fine. Until it arrives I’ve installed a manual switch. If I notice the solar panel temperature is exceeding 70 degrees, I switch the pump on.

Then we discovered that the bath was once again draining rather slowly, so I again had to flush the greywater pipe with the hosepipe. This time I not only flushed the pipe, but also cleaned the sump and the little bilge pump. I think matters will improve once the washing machine is installed in the bathroom, as the hot soapy water should keep the waste pipe a bit cleaner.

I’ve made some biltong with about 1kg of the deer meat. We were invited to dinner at our neighbours this week, and we took some along for them to taste. They were very impressed. Then yesterday the neighbour’s father turned up. He visits us once every two weeks or so to get some eggs. When he arrived, I was in the middle of scraping the deerskin which I am in the process of tanning; so I had to explain the procedure, and why I wanted to make leather (for the soles of my future mocassins). He seemed quite bemused by it, and obviously thinks we are totally mad.

The shower is now completely tiled … 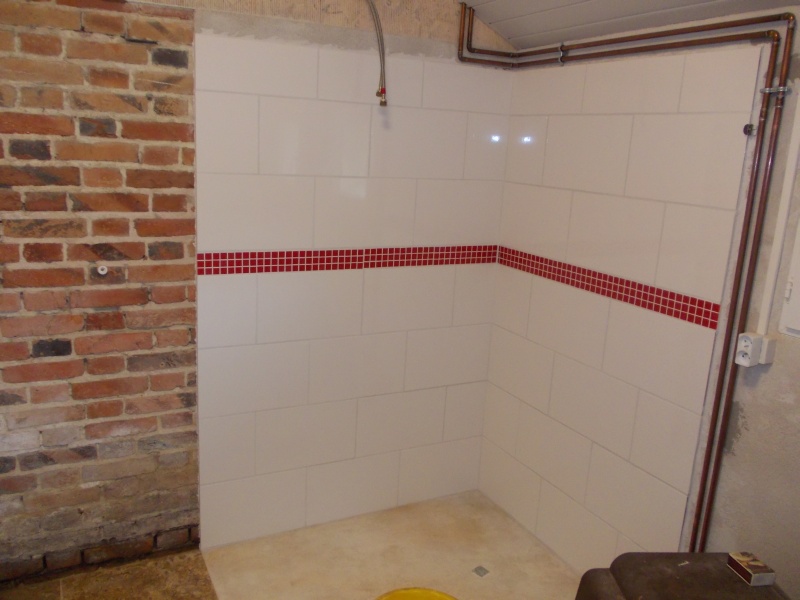 … and I have moved on to the bath surround. This is much easier because the walls are at least flat and straight! However, I regret there is bad news as far as the shower is concerned. With difficulty, I carried in the heavy sheet of 8mm thick tempered glass which will form one wall of the Italian-style shower, and fitted it into the supporting brackets which I had installed.

As I suspected, the upper corner of the glass did not quite fit because of the copper water pipes which run along the wall in that area. I needed to trim off about 2cm from this corner. As I had foreseen this, I had purchased a small diamond-impregnated cutting wheel for my Dremel. With a water spray bottle in one hand, and the Dremel in the other, I commenced cutting. Very gently, I may add.

I was half-way through, when all of a sudden there was a loud “BANG” and the entire glass sheet shattered into a million pieces. Fortunately I was wearing safety goggles, but bits of glass went everywhere. It took me an hour to sweep up the pieces. LSS was horrified when she got home; and is now completely opposed to glass shower screens. Instead we’re going to use a sheet of 8mm polycarbonate. At least that won’t break, although the down-side is that it scratches fairly easily.

Over the past week I have caught a grand total of 12 mice in traps upstairs. Hopefully that’s the lot, although the traps will remain in place just in case there’s any relatives I’ve missed.

The peas have taken off quite nicely in the garden. The first year, we used a roll of 2m high thick-wire fencing to give them a frame up which to climb. Although it worked well as far as the peas were concerned, installing and dismantling a 2m high fence some 10m in length was a horrible job. For the second year, I installed some poles, and tied string between them. Although much easier to install and dismantle, it was a lot of work. So this year, I constructed some proper frames. Using the same fencing wire as the first year, but installed in wooden panels. Very easy to put up (and presumably take down). We’ll see how they stand up to windy conditions. So far, so good.

The potatoes are also growing nicely; as are the radishes and lettuces. Beetroot, turnips, sweetcorn, carrots and parsnips have not yet made an appearance though. The polytunnel has produced some tomatoes which have now been planted out, and I believe there are some melons and watermelons in there as well.

During a storm last week, our Orange Internet box died. Fortunately I still have a couple of ADSL routers so was able to reconfigure one of them. Internet access was restored. However, we were without a telephone for four days until a new Orange box arrived.

Monday this week was yet another Bank Holiday. We took the day off, and visited an equestrian event at Lamotte Beuvron, where we watched some polo, and a rather strange sport called Horseball.

On Friday Friend M invited us to dinner. We took some biltong for her to try. She quite liked it but her daughter wasn’t too keen.

Then yesterday we again went to Lamotte Beuvron to see the Agricultural show. The main reason for going was to see the reportedly heaviest bull in the world. Called Fêtard, it’s from a farm in our region, and tips the scales at 1,950kg. (French article)

Of course it wasn’t there. We were informed it was otherwise occupied, and would only be in Lamotte on Sunday (today). And as the weather forecast is for torrential rain, guess who won’t be going! Actually I don’t think many people will be going today. Because the torrential rain has actually materialized. LSS estimates we’ve had some 50mm of rain today.

The road leading to the Aged FIL has now been repaired. Due to all the daily traffic, it had developed a tremendous amount of potholes. There’s the carer who gives him breakfast, followed by the washer. Then there’s the carer who gives him lunch, and the carer who gives him dinner. Not to mention the nurse who visits regularly, and the doctor on occasion. And of course LSS uses the road several times a week. Last year LSS had 39 tons of sand/gravel delivered, and spread this out over the road surface with a scraper blade mounted to the tractor. Unfortunately the repairs didn’t last very long, so she contacted a local contractor for a quote. The quote was presented and accepted on the Aged FIL’s behalf; and all the potholes have now been filled with crushed limestone. Hopefully it lasts, because it was expensive! And as a large proportion of the Aged FIL’s pension is going into the coffers of EDF, he won’t be able to afford to pay for road repairs every year. To assist in prolonging the lifespan of the road, I have installed a “20 speed limit” sign at the entrance to his farm. Not that I have high hopes that anybody will obey it, of course.

And finally, today was bunny-sexing day for the older Mrs. Bunny’s March litter. There are two females and one male; so these have now been separated. And we have now finally been able to count the number of little ones making up the young Mrs. Bunny’s first litter. There are ten. Of course they’re not easy to photograph; since their eyes opened they’re hopping around all over the place. They’re all tiny; about ten centimetres in length. 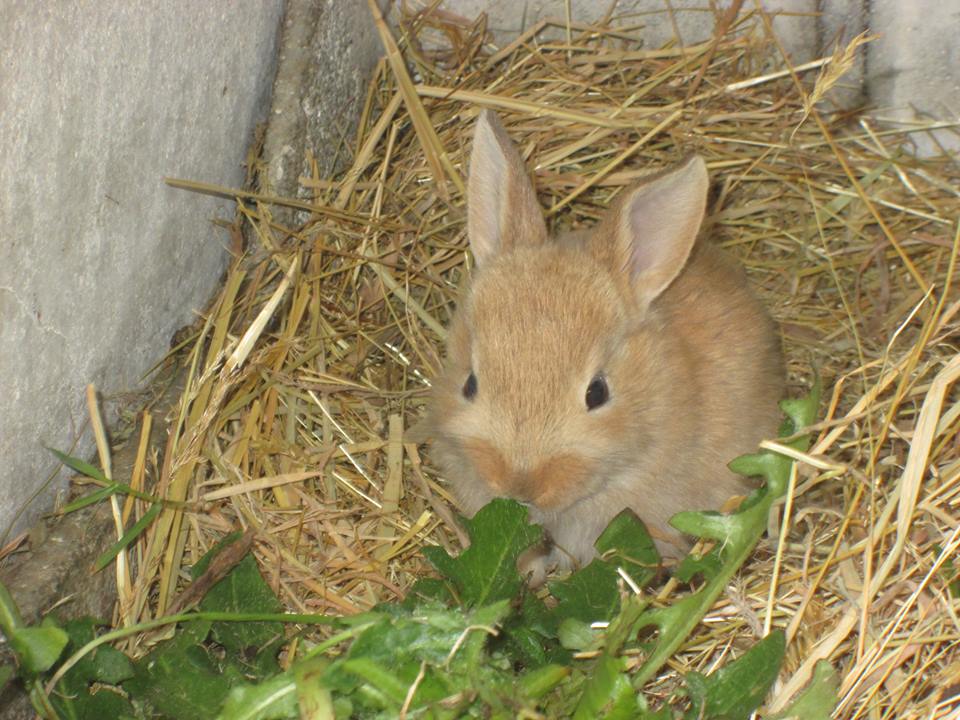