Well, that was unexpected. We received a telephone call from Mr. T this morning at around 08h30. We haven’t seen him since February. He wanted to know if we were in, because he was bringing us a present. When he arrived some five minutes later, he opened the rear doors of his van. Reclining stiffly on a couple of sheets of cardboard was Bambi’s late uncle.

Unfortunately a collision between the van and Bambi’s uncle occurred when Mr. T left work this morning. The van was undamaged, unlike the aforementioned animal. Mr. T didn’t want it, so thought of us. We therefore spent the morning skinning and butchering the carcass, and our freezer is now so full there isn’t room for a mouse. Not that we would want to freeze mice, of course. The cat prefers them unfrozen.

The shower tiling is progressing. That’s probably the most suitable word to use, progressing. One wall is done. The problems I’ve been experiencing are due to the wall not being perfectly smooth and straight, so I’ve had no end of fun getting the tiles straight and level. And LSS specifically wanted a row of small mosaic tiles half-way up the wall. Mosaics are easy to lay IF the wall is straight and smooth. If it isn’t, you get the tile cement bubbling up between the individual tiles. And it looked horrible; the individual mosaics were angled any which way. So I had to take them all off again. However, I then came up with a cunning plan. I installed them on a strip of tile backing board, and once they’d set in place, installed the entire thing on the wall. Now it looks much better. I’m so glad I purchased an electric diamond-wheel tile cutter for the floor tiles. It has come in very handy for these wall tiles as well. You see, to match the floor, I have decided to use a running bond pattern. Also, the particular width of this shower requires that every row has a half-tile. 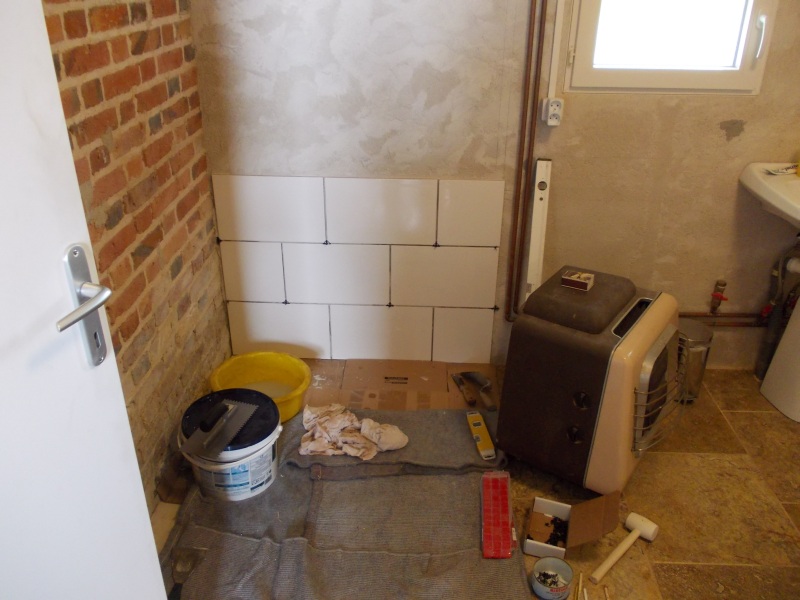 Next week, the other wall. This one should be a bit better as it appears to be straighter than the first. And although I won’t need a half-tile every row, I’ll still need some!

I’ve also been using the wood chipper once again. I had a large pile of branches to dispose of; and the area under the hen perches very definitely needed cleaning out and fresh material added. All the old nitrogen-rich stuff from under the perches went into a corner of the garden where LSS intends planting parsnips. We didn’t get any parsnips last year; they just refused to grow. So obviously this meant no parsnip wine either. Speaking of parsnip wine, the latest batch of beer is now ready. It’s a clone of a Belgian Triple called Carmeliet. Well, I think this is my Best. Beer. Ever. I’ll definitely be doing this one again.

I’ve also now bottled the most recent batch of sloe wine. However, the bad news is that we’ve now run out of empty wine bottles.

At one point last week we were down to 12 hens. April was not a good month for the chickens. In fact on the 26th we lost two. One was found dead under the perch, and I had to put the other one down because it was in a pitiful state. It had not been looking too well for a couple of days, and its condition was not improving. It may have been egg-bound. So on the 30th, we bought three new hens; one black, and two grey. We’re back to 15 again, not including George.

Cat has started bringing little friends home. It’s definitely spring, because the ticks are out in force. Although she’s given a spot-on treatment every month, this doesn’t last the entire month as far as ticks are concerned. We’re particularly careful because Lyme disease is becoming more prevalent in France.

We were invited for an aperitif at our “new” neighbour, Mr. K. We took a bottle of our home-brewed cider along, and they really enjoyed it. Of course they knew we had hens, so they expressed an interest in possibly buying some eggs. Unfortunately I think demand will always outstrip supply as far as this is concerned; because we certainly don’t want to have hundreds of hens!

Another leaning oak tree has now been processed, and is in firewood-sized pieces in the wood shed. We’re actually using less wood now, because the sun is making more of an appearance. In fact we’ve had solar-heated water this week, except for one cloudy day when we lit the boiler stove to give the temperature a bit of a boost.

I’ve also changed the engine oil in the tractor. It takes 13 litres, in case you were wondering.

This week I finally re-potted my bonsai. I only have three left from an initial collection of eleven; two black pines and a birch. The others unfortunately died a couple of years ago due to a particularly harsh winter. I’m using cat litter for the bonsai soil; it’s simply baked granules of clay which is ideal because it needs to be well-drained. Luckily Cat hasn’t noticed.

We appear to have some suicidal mice on the premises. For the rabbits, I installed a gutter at the rear of the cages so that their urine would not just drop to the ground at the base of the workshop wall. The gutter drains into a simple plastic bucket, which is emptied onto the compost heap when full. Well, it had been emptied. But the next morning there were two dead mice in the bucket. Fast forward two days; and another two dead mice. Well, between the rabbit bucket and the cat, at least the mouse population is being kept in check.

And as I’ve just mentioned bunnies, the good news is that the new Mrs. Bunny has had her litter. We’re not sure how many there are, because they’re not all out of the nest yet. But we’ve seen glimpses of three so far.

And finally, we went out for a dinner last Thursday, to celebrate our 11th wedding anniversary. How time flies!